A No-Stress Guide To Baby Naming

Your guide to picking the perfect name for baby — without the headache. 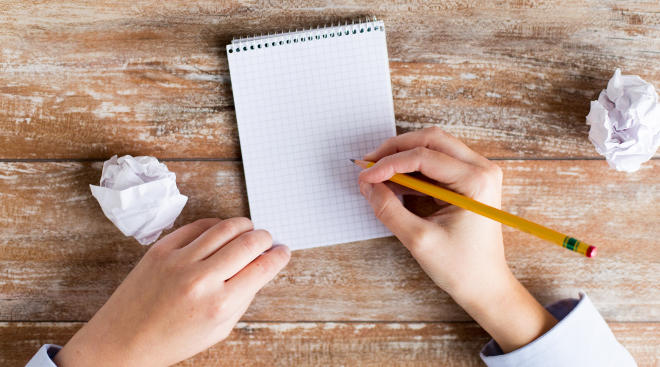 There’s no way around it—every baby needs a name. It isn’t always an easy decision, but with these real-mom tips, it can be a fun one.

Brainstorm
“For most couples, picking a name has become a nine-month process — even beyond,” says Pamela Redmond Satran, author of The Baby Name Bible and cofounder of Nameberry.com. It all starts with an idea, so…ready, set, go! Don’t think — just grab your partner and jot down every semisweet name that comes to mind (favorite teacher, great-grandpa, the cute kid in that Lifetime movie…anything goes).

Be nosy
“A radio talk show host here in the Philadelphia area suggested watching credits to shows and movies,” says one mom on TheBump.com message boards. You can also check newspaper captions for fun options, or even eavesdrop in line at Babies “R” Us. (Just try not to be too creepy about it.)

Buy a book
Scan the shelves of your local bookstore (or Amazon.com), and you’ll find a bazillion name-book options, from comprehensive lists of 100,000-plus names (The Complete Book of Baby Names by Lesley Bolton) to more quirky inspirations (Cool Names for Babies by Pamela Redmond Satran and Linda Rosenkrantz), and even heritage-specific options (O’Baby: The Irish Baby Name Book by Geoffrey Johnson).

Scour the web
'”I went on a lot of websites!” says another new mom. Want to honor your Hispanic (or Japanese, or Romanian) roots? Browse names by origin on the baby-naming tool on TheBump.com. Feeling adventurous? Try a search for avant-garde names on Nameberry.com. Want to see where a name is being used? Check out the NameMapper tool on BabyNameWizard.com. Be sure to check the Social Security Administration site too — they post an annual list of the most popular names in the USA.

Get creative
Still on the hunt? Consider going the celebrity route (Bronx, anyone?) and think of any non-name words that you might like to add to the list. Satran isn’t too hot on “made-up” names, but if you’re really aching for originality, some moms suggest blending your faves. “I wanted Jackson but my husband thought it was too popular and really wanted Paxton. Obviously, we came to a compromise and we both love it: Jaxton,” gushes a mom on TheBump.com.

But not too creative
Whatever you do, Satran warns against taking an existing name and changing the spelling. “Avery is nice,” she says, “but Avierigh…I think it just creates difficulties.” Also remember to say your child’s full name out loud several times — original or not — and think of any potential nicknames and taunts. (Hey, it happens.)

Fast-Forward
Some names, like Champ, may sound super-cute when you’re referring to a toddler. But what about when he’s applying for a job? In other words, remember the kid will grow up. In fact, Satran says that choosing a name embodies a lot of feelings about who you want your child to be and how you want other people to perceive them. “Try to adopt an adult perspective,” she urges. “A name is really something that is not just for the moment, but something that will live for the child’s entire life.”

Communicate
It’s not just a name. This could be a big deal between you and your spouse. “I think that these discussions often conjure up much deeper feelings,” says Satran, explaining that family relationships, hidden fears, religious conflicts, and childhood regrets could come into play. Don’t be surprised if you both get extra-sensitive at some point. Just try to listen to one another and talk it out.

Narrow
First off, give one another the power to veto. “It’s a good idea to have a no-fly zone,” jokes Satran. It’s important that you both dig it — especially the first name. And then, if you still haven’t had a “that’s the one!” moment, find a fun way to shorten the list, like each writing down your top three and only keeping the ones that overlap.

Compromise
Don’t let yourself be pressured into a name you don’t love…but consider that there are ways to “share.” Satran, for example, insisted on naming her first son after her father. In return, her husband won full middle-name rights. The result? Joseph Leopold! She recalls thinking, Of all the middle names in the world…Leopold? And now? “He’s in college and loves it.”

Chill
Still can’t decide? Well, there’s no real rush until baby is here. Even Satran went to the hospital with a couple of choices, and made the final call once she saw her child’s face.

Go with your gut
In the end, this is a choice for you and your partner. Forget any obligations (like the 12 Margarets on your mom’s side), any rude comments (“I knew an Ivan in school. He was a real jerk.”), and any other pressures. Take your time and find a name that fits your new family to a tee. Don’t worry, you will.