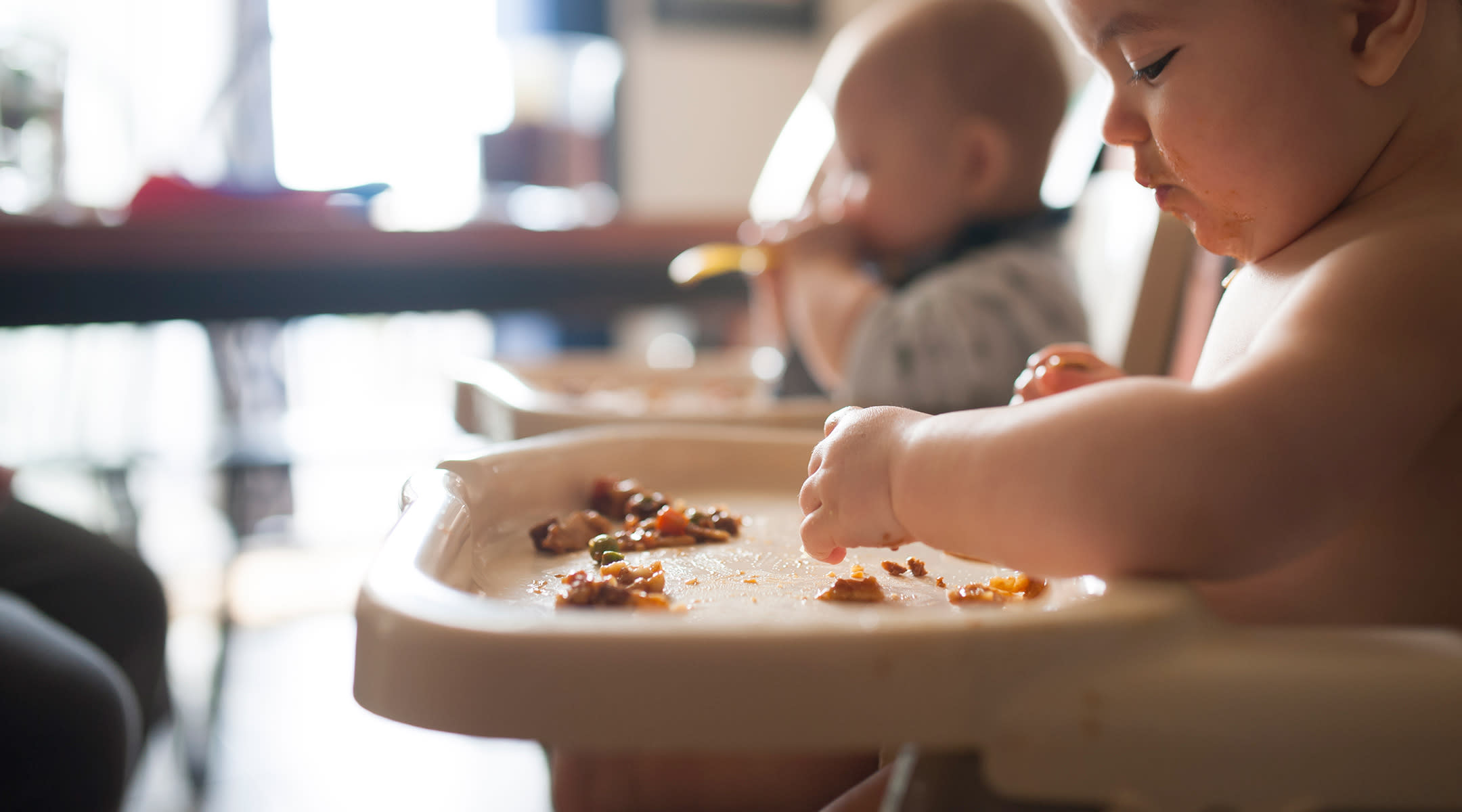 Is baby hungry for more sustenance? Here’s your expert guide to starting solids.

Starting solids is an exciting and important milestone in baby’s development—one that not only opens him up to a brand-new world of flavors and textures, but also puts him on the right path to growing healthy and strong. Here’s what you need to know about how and when to start baby food for a smooth transition.

In this article:
When to start baby food
How to introduce solids
Best first foods for baby
Introducing allergenic foods

When to Start Baby Food

Knowing when to start baby food is both crucial and tricky. Starting solids too early means you might increase the risk of choking, obesity and bellyaches, but starting too late means you might slow baby’s growth and encourage an aversion to solids, among other conditions. Fortunately, doctors have zeroed in on a sweet spot for starting baby food, which is sometime between 4 and 6 months of age—though, ideally, baby should be receiving his nutrition exclusively from breast milk until the six-month mark, according to the American Academy of Pediatrics (AAP). How to tell if it’s time for starting solids for your little one? He’ll give you clues, including:

• He can sit in a high chair comfortably on his own. This is a major sign in terms of when to start baby food, says Lauren Kupersmith, MD, a pediatrician at Hassenfeld Children’s Hospital at NYU Langone in New York City. It means baby can hold his head up and doesn’t need to be propped up to stay in the upright position, which is important to avoid choking.

• She looks interested at mealtime. Baby likes to mimic what we do, so if she likes to sit up like a big kid and watch you eat, then by all means let her try eating too.

• He can move food to the back of his throat to swallow. But if he tends to push the food out of his mouth—not because he doesn’t like it, but because he can’t seem to get that food to where it needs to go—hold off on starting solids.

How to Introduce Solids

At 4 to 6 months, most of baby’s nutrition will still come from breast milk or formula, so don’t worry if baby doesn’t like eating food right away. Introducing solids is a gradual process, and every baby learns in her own time. Here are some general guidelines for how to start baby on solids:

• Feed baby with a spoon. Letting him go at it with his hands may seem tempting (and super cute), but it’s best that he learn the right way from the get-go. (And even then, be prepared to clean up more than a few messes!) Also, never put cereal (or any other food) in baby’s bottle—it’s a choking hazard.

• Start slowly. When introducing solids, a half spoonful will do at first—you may even want to talk her through it (“Yummy!”). To make it easier for baby to get accustomed to the idea of swallowing solids, start mealtime with a little breast milk or formula, then give her some food (again, no more than a half teaspoon at a time) and finish off with more breast milk or formula. If she cries or turns away when you present the spoon, try again some other time. Start off with introducing solids at one meal a day, then slowly work your way up. The morning is a good place to start, since baby is often hungriest at that time. When starting solids, baby typically won’t eat more than an ounce or two in one sitting.

• Try new foods more than once. Since babies’ tastes will evolve, you may need to try a food 20 times before a baby actually likes it, says Kupersmith.

• Stick with the same food for three days before trying another one. This makes it easy to track whether baby is allergic to a particular food.

• Try foods in different forms. If baby doesn’t like food pureed, try it mashed. After all, baby is learning about new textures as well as new tastes. It may be a case of trial and error until you find a winner.

Got baby safely strapped into his high chair and bib? You’re ready to finally start feeding baby solids! There aren’t any official food rules for babies starting solids, and there’s no scientific evidence suggesting you should introduce one type of food before another, assuming the foods aren’t choking hazards. Nevertheless, baby cereal (such as oatmeal, rice and barley) is an “easy training food,” says Kupersmith, which is why it’s often recommended as baby’s first food; you can always mix it with more milk to build up to a thicker consistency. Many doctors also recommend starting vegetables before fruits, but there’s no evidence that this would make babies like vegetables more when they grow up—babies innately love sweets, and the order of introducing solids to baby doesn’t change that.

So why not simply start introducing solids with something you think baby will like? Here are a few common first foods for baby that are healthy and easy to eat (and, in the case sweet potato and banana, also easy to digest). Whatever you decide to feed baby, mash with a fork or puree before serving whenever introducing solids.

If your child has been breastfeeding, check with your pediatrician about getting a jump on pureed chicken or beef when you’re starting solids. These foods contain easily absorbable forms of iron and zinc, which baby needs by 4 to 6 months, according to the AAP.

At around 9 months, baby should have already worked his way up to a variety of foods, including breast milk or formula (or both), cereal, vegetables, fruits, meats, eggs and fish (see below regarding the last two). By now, he’ll probably settle on three meals a day along with two snacks. Let him consume about 4 ounces of solids at each meal (equivalent to a small jar of strained baby food) and about half that amount for each snack.

Save honey and cow’s milk for after baby’s first birthday—there’s a risk for infant botulism with honey (a type of bacterial poisoning), and breast milk and formula still offer better nutrition for baby than cow’s milk at this point. Avoid adult processed foods and foods that are choking hazards (such as marshmallows, peanut butter and hard foods that are difficult to soften or cut up—such as nuts, seeds, popcorn). Instead, the first foods for baby, and those in the months that follow, should be soft and served mashed, pureed or (once baby seems ready to move up from the really mushy stuff) cut up into really little bits. “There’s pretty much free reign at that point,” Kupersmith says.

Hesitant about improvising your first foods for baby? That’s okay too. If you prefer an “Introducing Solids” chart to help you plan out baby’s path, the guide below can come in handy.

Much of the confusion around when to start baby food stems from questions concerning allergenic foods. These are foods that cause allergies. The major culprits include dairy, eggs, fish, peanuts and tree nuts. In the past, parents were advised to hold off on exposing baby to these foods, but now doctors recommend introducing them early and in age-appropriate format, which means starting off with purees and soft textures.

“Dairy is an easy starting point, given options such as yogurt and cheese,” says David Stukus, MD, spokesperson for the American College of Allergy, Asthma, & Immunology. You can also try scrambled eggs in small amounts, although baby may not be too pleased with the texture at first.

As far as peanut products go, the National Institutes of Health issued new clinical guidelines in 2017 that encourage parents of children at high risk for peanut allergies to incorporate them into baby’s diet at 4 to 6 months of age. Giving these babies peanut products before the age of one actually decreases their risk of developing a peanut allergy before age 5 by 81 percent, compared to kids who are introduced to peanuts later in life. Parents of kids without the food allergy risk can start peanut products whenever they’d like, as long as the nuts are in an age-appropriate form: Peanut butter can be thinned out with water or mixed into a fruit or vegetable puree, and peanut powder can also be mixed into cereal and fruits. Again, don’t give whole peanuts or pieces of peanuts, since they’re a choking risk.

Allergic reactions to food are never just a fluke; they will happen with every exposure. Symptoms can range from mild (such as a rash or vomiting) to severe (such as trouble breathing). If baby has a food allergy, you’ll notice a reaction within minutes or up to two hours after eating the problematic food, Stukus says. If the symptoms are severe, call 911 right away. Otherwise, talk to your pediatrician; she can help confirm whether it’s an allergy or some other type of condition (such as a viral illness).