This year, we saw a ton of celeb moms and dads choose unique, glamorous and totally timeless names for their baby boys and girls. From traditional to trendy, here are our picks for the best celebrity baby names. 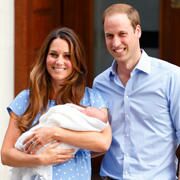 George
In July, Kate Middleton and Prince William announced they’d welcomed a future king to their family, but they made us wait days for a name. When they revealed that Baby Cambridge had been named George, not everybody loved it — but we definitely did! It’s strong and classic, but also sweet enough to work for a baby boy.

*_Eisele
*_We definitely didn’t see this one coming — but we were smitten once we heard it! Lady Antebellum lead singer Hillary Scott, and her husband, Chris Tyrrell, chose this name for their baby girl. It honors both Chris’s mother’s maiden name and Hillary’s mother’s middle name. In German, the name means “little iron,” so we’re willing to bet she’ll be one tough baby!

Holden
Backstreet Boy Howie Dorough and his wife, Leigh, settled on this sweet name for their baby boy. In English, it means “from the hollow in the valley.” Here’s hoping baby Dorough loves to spend time outside.

Greyson
Former American Idol judge Kara DioGuardi and husband Mike McCuddy welcomed their first son via surrogate together. Though the name literally means “gray-haired,” we love how vintage (yet cool!) it is.

Winnie
Funnyman Jimmy Fallon and his wife, Nancy Juvonen, welcomed their first baby together in the fall of this year. They picked the name Winnie as a nod to Lake Winnipesauke, where the two used to vacation together when they first started dating. It’s classic and cute.

Elijah
Talk about a popular name! Two sets of Hollywood parents — Elton Jon and David Furnish, and Glee star Heather Morris and her boyfriend Taylor Hubbell — named their sons Elijah. In the Bible, the name means “the strong Lord,” and in Hebrew, it means “the famous bearer.” How very fitting!

*_Valentin
*_When Ali Landry and her husband, Alejandro Monteverde, announced that they were expecting their third, we were hoping the third-time mama would choose a moniker as authentic and timeless as she did for her two older kids, Estela and Marcelo. Sure enough, she did! Baby’s name was inspired by a trip Ali and Alejandro took together to meet Pope Francis.

*_Everly
*_Just when you thought there wasn’t possibly more to love about new daddy Channing and his gorgeous wife, Jenna Dewan-Tatum, they revealed they’d named their baby girl Everly. It means “from the boar meadow,” and though it’s a unisex choice, we love how feminine and innocent it is for a baby girl.

Milan
No, it’s not just a city in Italy. When Shakira and Gerard Pique welcomed their first son together, they made an official announcement on their website revealing why they’d picked the unique moniker. “The name Milan,” they wrote, “(pronounced MEE-lahn), means dear, loving and gracious in Slavic; in Ancient Roman, eager and laborious; and in Sanskrit, unification,” which is a lot to live up to — but we’re willing to bet baby’s ready for the job!