The Best Celebrity Baby Names of 2018

Celebrities are pretty much guaranteed to come up with the coolest, most unusual names you’ve ever heard. Here are the best of 2018. 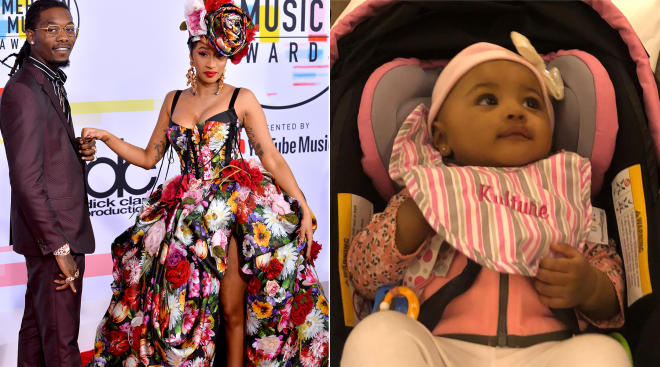 You can always count on the rich and famous to come up with interesting, unique, and, yes, weird baby names for their children—and the celebrity baby names that have emerged this year are no exception. We’ve taken stock and gathered up the best celebrity baby boy and girl names of 2018. Go on, take a peek; you just might find a few ideas for your own little nugget.

Behold the best of the best when it comes to this year’s celebrity newborn names.

Hilary Duff and Matthew Koma welcomed their first child together this fall. The pair didn’t disclose the reasoning behind their daughter’s name, but that didn’t stop fans from falling in love with their unique choice.

Gabrielle Union and Dwyane Wade chose a meaningful name for their first-born daughter. Kaavia has Indian/Sanskrit roots and means “a work of art,” and “James is from my Uncle James Francis Glass, who is also my godfather,” Union tells PureWow. As for the second middle name, Union says, “I’ve waited this long, so fo’ sho I was gonna get in there.”

Michael Bublé and Luisana Lopilato have faced their fair share of struggles regarding their son’s health, so a name that translates to “life” in Spanish seemed fitting for their newborn daughter.

Breaking Bad actor Aaron Paul and wife Lauren chose a symbolic name for their daughter. Hopefully the baby girl becomes the master of her own story.

Model Miranda Kerr and Evan Spiegel’s baby was born in May, and the pair named their little boy after Spiegel’s grandfather.

Whether Lisa and Jack Osbourne turned to the beloved Disney mouse for some inspiration or just liked the sound of the cute name, it’s one for the books. The contrast between the modern “Minnie” pairs nicely with the more traditional “Theodora.”

Leave it to Pete Wentz and his partner Meagan Camper to choose one kickbutt name for their little one. While the name Marvel is associated with the comic book brand, it was also a pretty popular girl’s name in the early 1900s.

Kylie Jenner rocked everyone’s world when she announced her secret pregnancy and birth of her daughter with Travis Scott. Taking the world by storm, the name choice is appropriate for the baby girl.

“Kiari,” the middle name Cardi B and Offset chose for their daughter, comes from her father’s real name, Kiara Cephus. As for her first name, it could also be inspired by Offset’s 2018 album, Culture II, Bustle points out.

Chip and Joanna Gaines broke protocol when they chose a name for their son that didn’t begin with the letter “D,” like their sons Drake and Duke. Fairly new to the scene, the name Crew only recently made it to the top 1,000 baby names in 2011, according to Nameberry.com.

Khloé Kardashian and Tristan Thompson’s daughter has a namesake inspired by her family tree. “My grandfather’s name on my dad’s side was True Otis Houghton. My real dad’s name was Robert True Houghton, so I am so excited Khloé named her daughter True,” grandmother Kris Jenner says.

Power couple Chrissy Teigen and John Legend named their adorable son after musical icon Miles Davis, the mom revealed on the Billboard Music Awards red carpet. As for the rest of the name, the pair simply chose Theodore because Teigen really liked it, and Stephens is Legend’s real surname. 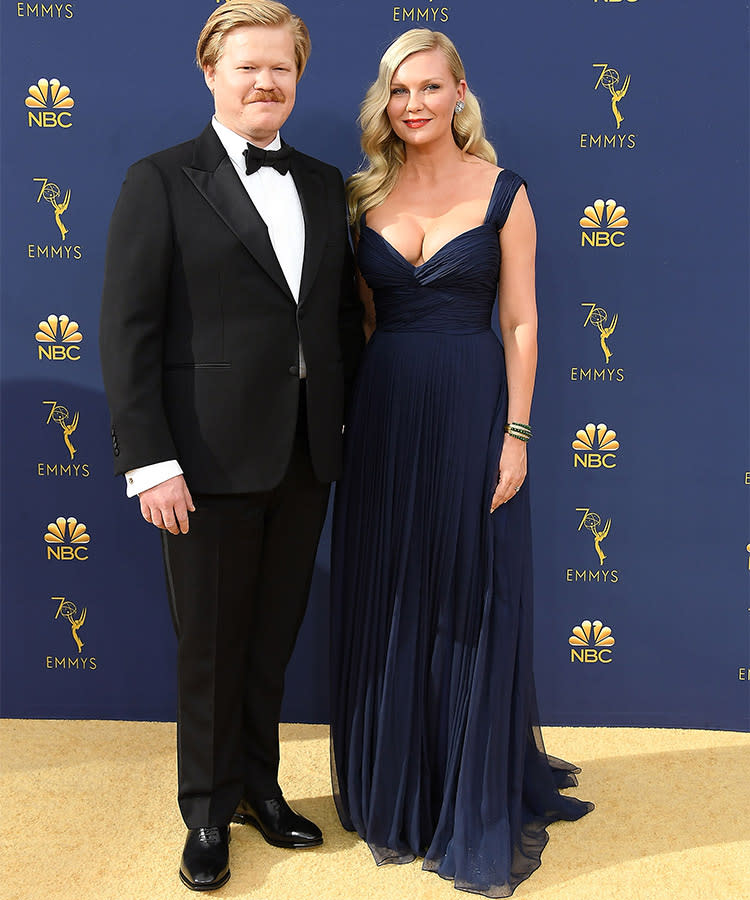 While the reasoning behind Kirsten Dunst and Jesse Plemons’ son’s namesake is unclear, att.net suggests it could be symbolic of how the pair started dating. Ennis was the name of a character in season 3 of Fargo, and the two first met on the set of season 2 of the show, where they played a married couple.

Singer Adam Levine and Behati Prinsloo’s out-of-the-ordinary namesake for their daughter has a special beauty to it. While it’s not confirmed, Bustle points out the pair’s choice could have been inspired by nature. Geo comes from the Greek word meaning “earth” or “land.”

Welcoming their baby girl via surrogate, Kim Kardashian and Kanye West named her after the city where Kardashian’s father was raised.

From Bear to Zen and everything in between, check out the best in class in baby names of 2017.

Singer Liam Payne and his girlfriend, singer Cheryl Tweedy, debated what to name their son before finally deciding on Bear. “I wanted a more traditional name and she wanted a name that was more unusual,” Payne told Total Access. “And the reason she chose Bear in the end was because Bear is a name that when you leave a room, you won’t forget. And I like that.”

The Hills star Lauren Conrad went with a classic name for her first son with husband William Tell. While his legal name is William (a hat tip to his dad), the couple is calling him Liam, an Irish short form of William.

Total Divas star Brie Bella welcomed her daughter Birdie in May. She said on her YouTube channel that she and her husband, Daniel Bryan, decided on the name because they wanted something that started with a “B” to match their family’s names. When they came across the name Birdie, they both knew that was it.

Dancing with the Stars pros Peta Murgatroyd and Maksim Chmerkovskiy spent a lot of time selecting their son’s name, Murgatroyd revealed on her blog, All Things Fam & Glam. They wanted something short because Chmerkovskiy is “kind of a mouthful,” she wrote, and they decided on Shai, which means “gift” in Hebrew.

Born to Hamilton star Leslie Odom Jr., baby Lucille has a vintage name that conjures up images of legendary actress Lucille Ball. While Lucy is a fairly common name, Lucille is pretty rare these days.

Baby Slate was born to US soccer star Landon Donovan in June. Though Donovan didn’t reveal the meaning behind his son’s name, he got a lot of props on Twitter for its originality. 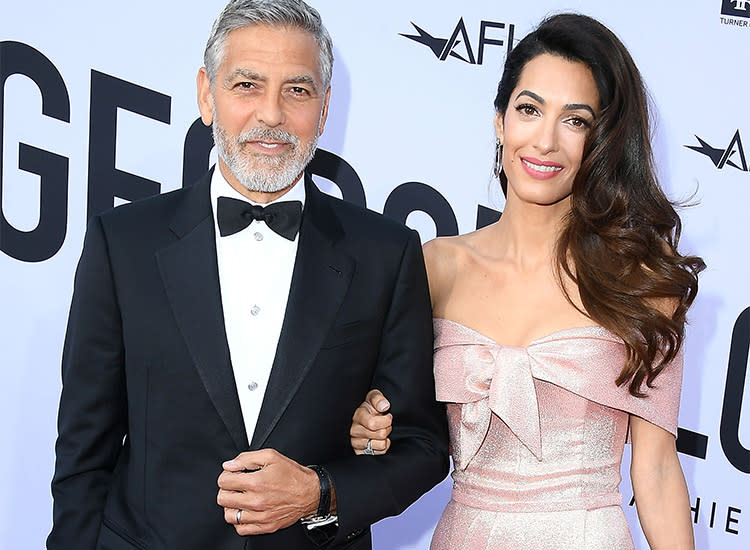 Proud papa George Clooney told People that he and his wife Amal “didn’t want to have really dumb names” for their kids. Instead, they went for classic monikers. “We figured these kids are going to be looked at a lot and watched and [have their] every move sort of judged, and we wanted them to at least have a break with the names,” he said. “So we looked for some sort of normal names.”

Amber Tamblyn and her husband David Cross revealed their baby daughter’s name in an Instagram post featuring a letter Hillary Clinton wrote to the baby. Marlow, which is an Old English name that means “driftwood,” is also the name of Sienna Miller’s daughter (with the addition of an “e” at the end).

Moonlight star Mahershala Ali and his wife Amatus had their first child together in February, a baby girl they named Bari. The name means “of Allah” in Arabic.

Baby boy Grey was born to actress Molly Sims in January, joining big siblings Scarlett and Brooks. The name has English origins and is definitely unique.