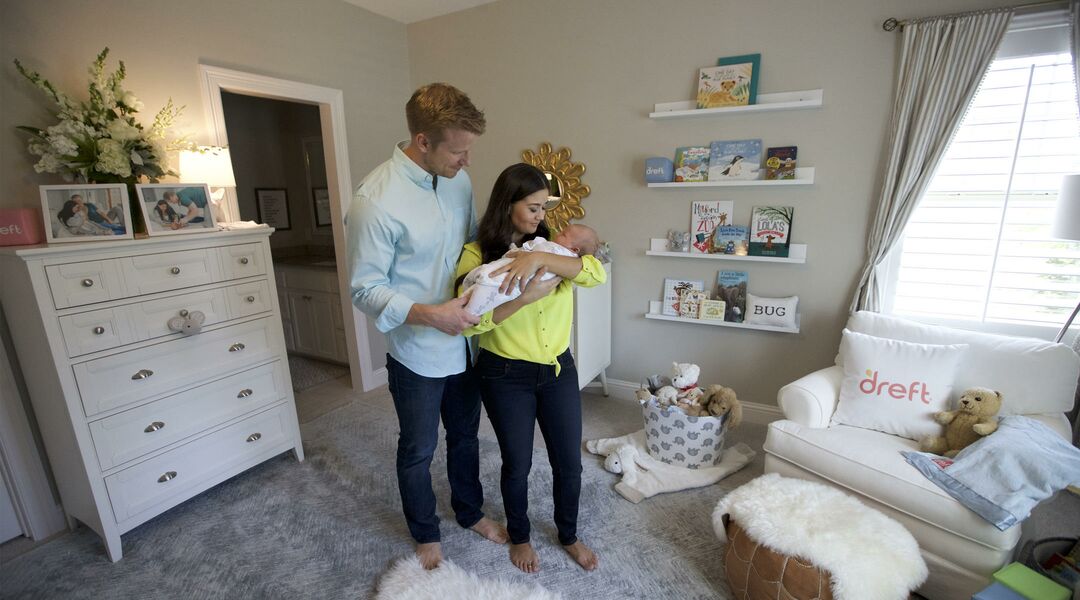 <em>The Bachelor</em> couple isn’t afraid of elephants in the room or fuzzy materials to warm up a modern baby room.

At the dramatic conclusion of The Bachelor season 17, surrounded by lush tropical jungle, Sean Lowe knelt down on one knee and asked Catherine Giudici to marry him—and she said yes. Fast forward three years, the Dallas-based couple is now celebrating another major milestone: the birth of their first child, Samuel Thomas Lowe, this past July. Settling into life with baby, the first-time parents and Dreft ambassadors talked with The Bump about the many elephants in baby Samuel’s nursery (hint: it has something to do with mom and dad’s engagement story!) and their special DIY project for the room.

What was your vision for the nursery design?
Sean: “We wanted to keep the nursery in line with the rest of our house and our interior design tastes, so our vision was a cool, comfortable, contemporary look. We didn’t know if we were going to have a boy or girl, so we wanted to go with gender-neutral colors and keep it clean with lot of whites and grays.”

Was there something special that you just had to have in the room?
Catherine: “One thing that was important for the room was texture. With all-neutral colors, I wanted to create dimension through texture. I used a lot of fuzzy materials, which also helps make the nursery a really comfortable space. We love spending time in there, relaxing with Samuel in the chair and doing tummy time with him on the floor—we just like being in that room.”

Did you tackle any DIY projects for the nursery?
Catherine: “The wallpaper was an important element. I designed it myself and centered it around fun sayings that relate to baby and parenting—things like “#squadgoals,” “Mommy, you’re the breast,” “Nip/Suck,” just phrases that would make me smile and be special for him.”

There are quite a few elephants and other animals in the nursery—was that an intentional theme?
Catherine: “I know, it’s a safari in there. I think every baby’s room has animals in it, but ours is out of control. We’re especially partial to elephants— we got engaged in Thailand, and rode off into the sunset on an elephant. Plus, elephants aren’t gender-specific, so we wound up getting a lot of gifts that were elephant-centric.”

When you were designing the nursery, what did you have the most fun with? Did you run into any challenges?
Sean: “The most fun was definitely Catherine coming up with the wallpaper and picking out textures to make the room soft and cozy. When it was time to buy items like the changing table, it was interesting to think about what makes one different from the others. For the most part we relied on other parents to figure out what we needed. We looked to them because we were in uncharted territory!”

Ready to register for your nursery? Get started now.

6 Royal Nursery Ideas Fit for Life in The Palace