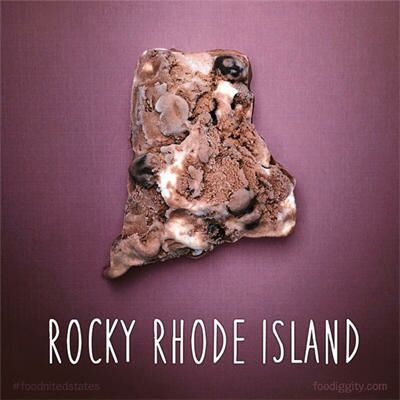 Step aside, Pancake Dad; Chris Durso is laying out a map of America via food.

The former art director and self-declared “creative professional and food satirist” is carefully crafting all 50 states out of different foods, working hard to create a pun every time. Think “Kaleifornia,” “Piedaho” and, our favorite so far, “New Jerky.” As he did with “Swissconsin,” Durso tries to incorporate regional foods into the design when he can. But the pun is really top priority, à la “South Dacocoa Puffs.” The project began last summer at the suggestion of Durso’s nine-year-old son, Cameron, after the pair walked past a map of the United States. “When he mentioned the idea of doing food states, I think I saw something similar, where there were pictures of food made out of different meats or something,” Durso tells Today Parents. “And I was like, ‘Well, that’s kind of been done.’ But then Cam goes, 'But what if they were called, like, ‘New Pork’ or ‘New Jerky’? Puns are always a hit, so I knew we had something there.”

As word spread, so did suggestions. “We would get write-ins, whether it was through email or on Facebook,” Durso says. “We would just get inundated with ideas for states.” He initially planned to finish the project by this summer. But since it’s gone viral, he’s considering speeding it up — easier said than done, since the process is so meticulous.

To make each creation, Durso uses state-shaped cookie cutters, freezing the food when necessary so it will stay together for the photo. Photos aren’t dramatically altered on the computer, and everything is made by hand.

Still, the attention to detail isn’t enough for some state residents. “An angry Rhode Islander got back to me and was like, ‘You didn’t do the inner channels! What’s wrong with you?’ And I’m like, ‘Really?’ I’m in my backyard with melting ice cream, trying to make a state.” Stay tuned for the final project: a composite map of the Foodnited States of America.