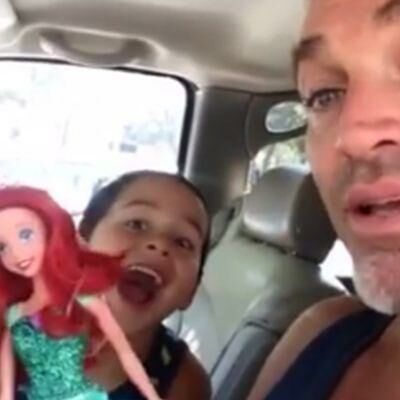 California flimmaker Mikki Willis’s latest video isn’t a high-budget production. In fact, it’s barely longer than 60 seconds. But it’s received millions of views and propelled him to a new level of recognition, all because he’s revealed himself to be an accepting father.

After his son Azai received a duplicate of a gift, Willis took him to the toy store to exchange it for a new one. Azai’s selection? An Ariel doll from The Little Mermaid.

“How do you think a dad feels when his son wants to get this?” Willis asks in a Facebook video. Azai, who is seated next to him in the car, screams “ya!” And Willis does too.

“I let my boys choose their life,” he says. “You have my promise forever to love you and accept you no matter what life you choose."

Azai’s toy selection may be outside of stereotypical gender norms, but it’s certainly not unheard of. In fact, in an effort to eliminate those stereotypes, retailers like Target and Amazon recently eliminated “girl” and “boy” as toy categories.

After an outpouring of positive feedback, Willis posted a lengthy followup to the video, along with a letter delving deeper into his parenting style.

“Many are asking me, ‘how did you feel the moment Azai chose that doll?’ The honest answer is, it didn’t surprise me at all,” he says. Azai is equally fascinated by princesses and robots. One moment he’s all boy, the next he’s expressing a softer, more angelic side. For me this behavior rings more authentic than playing one note all the time. That said, I did have a little reaction to Azai choosing that particular doll. When I saw the collection it was part of, and didn’t see much in the way of variety of skin colors or body types, I had to resist my urge to say, ‘Why don’t we chose a more realistic doll.’ I don’t want my boys to adapt to the programming that a women should be built like a Barbie. I said, ‘Let’s look at all the dolls in the store first, then you can decide.’ He was clear, ‘I want this mermaid.’ I backed off knowing this would be the catalyst for us to have a powerful conversation about the beauty of body-types and racial equality."

Willis continues, explaining how he views his role as a father. “My job as daddy is to provide a safe playing field for my boys to play whatever game they choose, or better yet, create their own game! I trust that by the time they realize the world isn’t as accepting as mommy and daddy they’ll have such a solid foundation that nothing will shake their stance to fully, and unabashedly be themselves. One more tidbit of truth — As much as I support my boys to express themselves, I admit to deleting Disney’s Frozen theme song from our playlist. I just could hear it again!”

We love him even more.