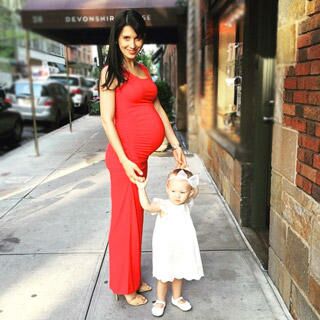 The yoga instructor, “Extra” TV lifestyle correspondent and upcoming author shares how she prepped for her second child’s arrival.

When it comes to managing her life as a mom and her life in the public eye, Hilaria Baldwin has really come into her own. In 2014, tens of thousands followed the yoga instructor on social media as she demonstrated a different yoga pose every day for a year, and this year, she’s shared health, wellness and diet tips while proudly showing off her growing baby bump and capturing adorable moments with daughter Carmen, 21 months. We talked to Hilaria on June 12, just five days before she announced the arrival of Rafael Thomas Baldwin on Instagram. But that home stretch of pregnancy wasn’t slowing her down. In fact, she spoke with us moments after returning from the beach with Carmen, a break she took between writing sessions for her first book, due out in January 2017, and dealing with a very active belly. Here she shares what she’s learned from two pregnancies and what she’s looking forward to about raising a son.

The Bump: What was it like chasing after a toddler while pregnant the last nine months?
Hilaria Baldwin: This pregnancy went a lot faster, and overall, has been easier. Over the last nine months, I had moments where I was able to run around the beach with my daughter, but then I’d have other moments where I felt like, “OMG! I can’t even stand up!” So I think it depends. It’s harder, but at the same time, it’s your job as a mom. There’s no sitting around and complaining about it, you do what you have to do and you don’t question it.

TB: How was expecting a boy different than being pregnant with a girl?
HB: Everybody says carrying a boy is different from carrying a girl, and that’s been true for me. I found out we were having a boy early on, at about 10 weeks. I kind of knew anyway because I just felt so different, so I wasn’t surprised. I would have been if it was a girl! You can see in photos that I carried very differently with Carmen. Although I didn’t gain that much weight overall, it was in my face, my arms, my legs—everywhere. With this pregnancy, my weight gain has been much more belly-focused than anywhere else. But I feel so blessed that I’ve been able to experience both.

TB: How did you first reveal to Alec that you were pregnant?
HB: I was doing a shoot for “Extra” and was feeling pretty nauseous. I thought it was odd because I never get sick, and when I got home, I realized I was five days late, so I thought there was no other explanation. I suggested to Alec that we go out to dinner. On the way home, we stopped at a drugstore to pick up a pregnancy test and took it when we got home. He was standing outside the bathroom door so I walked out and said, “Yup.” And he said, “Okay, now we know. We’re doing it again.”

TB: Did you stick to the same diet and exercise regimen as your first pregnancy?
HB: No. I’m eating differently, a lot of small meals. With Carmen, I was a lot sicker in the beginning and wanted to eat a lot more; I craved sweeter things. Now I’m at the part of the pregnancy where the baby is pushing on my stomach so much that you think you’re hungry and then you eat five bites and feel like you can’t eat anymore. Then an hour later, you’re hungry again! At this stage, I should be eating about 300 extra calories than normal each day, but it’s very easy to eat more than that. I also didn’t work out as much this time around, mainly because I have a toddler. As much as I love to exercise, I love my daughter more. If I am working during the day, and I have two hours free, I’d rather go home and see Carmen then go to the gym. Despite all of that though, I’ve actually gained less weight with this pregnancy.

TB: Does Carmen do yoga with you?
HB: She does this thing where she puts her head on the ground and goes, “yoga!”

TB: Is Carmen excited to become a big sister?
HB: I think she kind of gets it. She wants to go play in his room and go in his crib. She pats and kisses my belly, and asks in Spanish, “How are you today baby?” She does all of these things that are very sweet, but I think the reality that someone new is going to be here and isn’t going to go away isn’t something that she’s able to comprehend just yet.

TB: How do you plan on making her feel involved and not left out once her baby brother arrives?
HB: I’ve been reading a lot about it. We’re going to bring her to the hospital and have her spend as much time as she can there. We’re going to do the whole gift thing, and are still trying to decide what it should be. Right now, she’s obsessed with balloons, so we’re leaning towards that. At 21 months old, she’s just starting to grasp the idea of gifts. Besides that, we’re going to focus on making sure that she knows she’s a big girl. I’ve read that she may regress a bit and want to be a baby again, so we’ll embrace that and let her go through her emotions. Hopefully I’ll handle it well.

TB: You were more private on social media with your first pregnancy. What made you decide to be more outspoken and visual this pregnancy?
HB: I think what people have seen over the past four years [since being with Alec] is me coming into my own. I’m not a first-time mom anymore. I didn’t know what an exciting-yet-scary experience pregnancy was going to be like. I taught yoga for so many years and that was my platform, and as I’ve become more comfortable in the public eye, I’ve realized that so many women are ashamed of themselves when pregnant. Now I have an opportunity to have a bigger platform and help more people. So one of the reasons I’ve posted these belly pictures and that I am so open is to show women there’s nothing to be ashamed of. And at least from the comments I receive on Instagram, it seems to be working.

TB: Your book comes out in January 2017. Is it going to have a pregnancy or parenting focus?
HB: My pages are due this January, and as I’m learning, it’s a long process, but it’s been really fun. Part of it is about me being a mommy, and I’m sure I’m going to include some stuff about pregnancy. But mainly, I’m focusing on my philosophy of yoga and de-stressing, and then I get into exercise and nutrition as well. It’s what I’ve been teaching for years and it’s really fun and scary to put it together. It’s my first book, but I’m hoping it will be a really great experience. And I’m hoping that people really like it!

TB: Several of your Instagram videos show Carmen counting in English and Spanish. Are you raising her to be bilingual?
HB: Yes, it’s amazing. She was an early talker—she started talking at five months old. She said ‘mama’ at five months then ‘baby’ and it went from there. She’s very good with numbers; In Spanish she can count to 20 and in English she can count to 10. I try to speak to her only in Spanish while Alec speaks to her in Spanglish, but primarily in English and she hears English in other places too, like the playground. She speaks more Spanish than English right now, but it’s getting to be pretty even. Recently, she will say one thing, like ‘swings’ to me in Spanish and to Alec in English, so she now understands that some people speak Spanish and some people speak English. It’s nothing that we explain to her, just something that she figures out.

TB: Is there anything you plan to do differently this time around when it comes to postnatal recovery?
HB: I just have to listen to my body, and hopefully, everything goes really well. I’m curious to see what breastfeeding is like the second time around, because it was so easy with Carmen. I did it for 15 months, until I found out I was pregnant. The hardest thing I’ve done when it comes to parenting so far is weaning her. It took about three weeks, it was very painful because she would ask for it and would have trouble sleeping through the night.

TB: Do you have any fears about becoming a mom of two or about raising a boy?
HB: Yes! I do. I’m hoping that I’m enough for two. I’m hoping that Carmen’s feelings don’t get hurt since she’s such a happy and secure child right now, but doesn’t like sharing. During the pregnancy, even when Alec put his hands on me, she gets mad, starts crying and takes his hands off. She’s just at that age where, “My mommy is my mommy” and ‘nobody better touch my mommy except for me’. So I hope that I do a good job making her feel included. My brother is 20 months older than me and we’re good friends—my kids are going to be similarly close in age so I’m hoping it will be the same for them. And I hope I’m good at changing baby boy diapers too—I’m a little scared!

TB: Lots of parents say surviving those first few weeks with a newborn can be so challenging, what’s your game plan?
HB: Deep yoga breaths and a good sense of humor!