How Babies Are Made

No, really, you probably didn’t know this is how it actually happens. 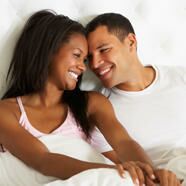 You and your partner decided you’re ready to start trying (yay!) to make a baby. So now what? Should you clear your schedules and spend the week in bed? No. Unless you want to, of course. (In that case, have at it!) But having sex nonstop doesn’t guarantee you’ll end up pregnant, even though that’s what sometimes happens. For starters, you’ll need sperm (duh) and eggs — and, in most cases, a hell of a lot of patience.

Before you two get cozy, you’ll both need to be in tip-top shape. That means you’ll need to  kick that cigarette habit and make sure you’re not drinking too much. For women, it’s important to have regular periods, because that means you’re ovulating and your fallopian tubes are open (which is key when you’re trying to conceive).

And if you’re older, it’s really important to be in tune with your fertility, even if it’s not your first priority. Barry Witt, MD, Associate Professor Clinical Obstetrics and Gynecology at the NYU School of Medicine, says conception may not be as easy as you’re expecting it to be. “Many women believe that they can wait until they’re in their late 30s and 40s to begin to try and conceive, due to the competing interest in their careers,” says Witt, Medical Director at the Greenwich Fertility Center in Greenwich, CT.  “The reality is that the  number and quality of the eggs begins to diminish significantly in the early 30s.” So basically, if you’re planning to put kids on hold until your career flourishes, check in with your doctor regularly.

For guys, sperm is really important (you knew that already, though, right?) — and practice makes perfect! “Frequency of intercourse is necessary,” Witt says, “to assure that the sperm are present in the female reproductive system at the time of ovulation.”

In her book _ The Parent Trip: From High Heels and Parties to Highchairs and Potties_, author Jenna McCarthy writes that “the lone successful sperm has the best chance of reaching and impregnating an egg (presuming you are producing viable eggs, and who really knows until you have this checked?) in the two days before ovulation and on the day of ovulation. The day _after _ovulation, even the strongest swimmer’s fighting chances decline to a discouraging zero percent.”

Translation: if you miss that “golden window,” you’re back to square one — and that means waiting four-to-five more weeks until it’s time to try again. (Though, of course, you can “practice” in the meantime!)

So when the hell does ovulation actually happen? For most women, ovulation occurs anywhere between 11 and 21 days after your last period or 12 to 16 days_ before _your next period. Still not sure? Try using an ovulation calculator, so you’ll know when you’re ovulating (and when to get it on).

Okay, it will still feel good, but you might be having sex so often that it feels more like a responsibility than a fun-time activity. But if you’re serious about having a baby, it’ll be worth it. McCarthy says that “procreative sex definitely feels more purposeful,” even if it doesn’t feel sexier. She notes that for most of her adult life, she and her partner behaved like a pair of “lust-driven hedonists, doing what feels good when it feels good in self-centered pursuit of pleasure.” All that changed, though, when they decided to turn their two-some into a three-some. Sex started feeling less about them and more about the children (even if they hadn’t arrived yet!).

Witt says that the number one question patients ask is whether or not they should have sex at the certain time every day. Which, of course, _really _takes all the fun out of it. Be spontaneous, and don’t be shy. “The best advice is to have frequent intercourse beginning soon after menses ceases until the day of ovulation,” Witt says, because there’s no benefit to “storing up sperm.”

Think of babymaking more like a marathon than that disastrous first time after high school prom. You’re grown-ups, you know how your bodies work and know what you need to conceive. But there’s a lot of training involved, so make the most of it — and don’t forget to laugh at yourself (seriously!). Maintaining a  sense of humor and a  sense of sexy-time adventure will keep you both feeling positive about your mission. Because let’s face it, the more  stressed you feel, the more your fertility is affected. And as McCarthy puts it in her book, trying to conceive is an intimate adventure: After doing the deed, she writes, “Joe flips me onto my back, thrusts a pillow under my rear end and grabs my ankles, hauling them high into the air. ‘Gotta help the guys reach the finish line!’ he practically shouts.”

Be Ready for Surprises!

Oh yeah, there will be some serious shockers along the way, like the fact that your guy should ditch those tighty-whiteys because they’re not helping you get pregnant.

And you know your body better than you think (we swear!), so when in doubt, just trust your senses. You’ll actually have a stronger sense of smell when you’re ovulating, so warn your partner not overdo it on the cologne — because his more natural scent will likely be a turn-on.

Another big surprise? Nature’s at work, which means you’re sexier than ever when you’re ovulating. So why not sneak in a quickie before reaching for that tub of ice cream and settling in to watch your favorite romantic comedy. Be playful with your partner — and don’t be afraid to go for that extra O. Who knows, it might be the time that works!

The Best Sex Positions for Getting Pregnant