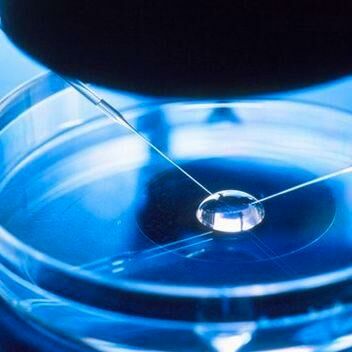 You’ve heard of sperm donors and surrogate mothers, but what about female mitochondria donors? It’s only in the research stage right now, but it could be a new part of IVF in two years.

The process is called mitochondrial replacement , or " three-parent" IVF. Why three? The baby will have genes from its mother, father, and a donor. This is good news for couples worried about passing on genetic faults and incurable diseases to their children. During the IVF process, faulty mitochondrial DNA — the cause of problems like brain damage, heart failure and blindness — is removed. It’s then replaced with healthy mitochondrial DNA from a donor.

The British scientific panel reviewing this new method says research “does not suggest that these techniques are unsafe.” But many of the concerns are ethical. Is this coming too close to a genetically modified “designer baby”? The typical interpretation of a genetically engineered baby makes us imagine a future super-human athlete or obscenely gorgeous model. But researchers maintain that with three-parent IVF, the only change would be the lack of a health complication.

Three-parent IVF has never been carried out in humans, and is actually currently illegal in Britain. In the US, an FDA committee is deciding whether clinical trials can begin.

What do you think — does mitochondrial replacement tread too close to a breach of ethics?