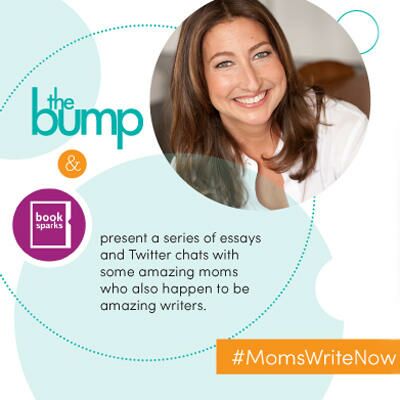 We’ve already introduced you to Maria Kostaki and Kelley Clink. This week: Kamy Wicoff, author of Wishful Thinking. Her debut novel tells the story of every mom’s fantasy: being in two places at once. Co-founder of She Writes Press, Wicoff lives with her family in Brooklyn, NY.

Make sure to join our #MomsWriteNow Twitter chat with Wicoff on Thursday from 1pm-2pm EDT by following us at  @TheBump.

In my new novel Wishful Thinking, an overwhelmed working mother of two gets a time travel app on her phone that lets her be in more than one place at a time. In other words, she is so stressed out that jumping through a wormhole seems like a reasonable solution to her problems. I feel like that sometimes too, which is why I wrote the book. My epic “mom fails” list is long, but highlights include: 1) the time I forgot to pack baby wipes and turned around to see my 10-month-old son’s stroller covered in poop, including the pacifier he was about to stick in his mouth; 2) the time I had to give my older son an IOU in lieu of his main present on Christmas morning (long story); 3) the time I forgot to put sunscreen on the back of my red head’s neck and he crisped up like a over-microwaved piece of bacon.

At times like these, I feel like a guilty loser. What kind of mother forgets to pack a bathing suit for the end-of-year field trip to the beach? Modern motherhood is more complicated than ever, but it’s easy to be hard on yourself. Another reason I wrote Wishful Thinking? To refute that craziness entirely.

For every mom who has felt like a failure, here are three things you should never forget.

1) Your kids will remember the good stuff

My mom used to lament that she was sure, when we were adults, we would only remember her screw-ups. And yes, I can name a few. But when I look back at my childhood, the good memories far outweigh the bad. How could I forget the time I had an ear infection when I was nine and she stayed up all night with me and let me curse like a sailor? Or the time a huge Texas-sized thunderstorm rolled in on a summer afternoon and she ran around in the rain with my brother, sister and me? When you screw up as a parent, the stakes seem so high, and the sense of responsibility runs so deep, it can feel catastrophic. But the only catastrophe for a child is a mom who doesn’t care what impact her actions have on her children. If you feel like a failure sometimes, it’s because you’re a mom who cares, and your kids know it.

My dad is a child and adolescent psychiatrist, so I have an expert on call any time I know I’ve made a mistake with my kids. Whether it’s losing my temper and yelling, or being too hard on them about something, my dad has emphasized with me again and again that the calm, caring, honest conversation I have in the wake of that mistake is far more important, and has a much greater impact on my kids long-term, than the incident that led to it. Knowing this has comforted me many times, and the conversations I’ve had with my kids to repair damage done by a mistake I’ve made have been some of our most meaningful.

My boys have an expression they use when I do one of my signature mom fails, like forgetting my phone in the grocery cart, leaving my keys in the car, pulling an insane u-turn because I missed taking a right, and so on. They say, “That’s classical mommy!” (I don’t have the heart to tell them it really should be “That’s classic mommy." It’s just too cute their way.) Once, when my mom was visiting, the boys and I had a hearty laugh over one of my classical mommy moves, and she said, “I really admire the way you can laugh at yourself with your boys. It was hard for me to do that.” My mom, who didn’t have a mom she wanted to emulate in any way, and sometimes felt she was flying blind as she navigated parenthood, was hyper-sensitive to any suggestion she’d gotten something wrong. It wasn’t until I became a mom that I realized that this sensitivity was as hard, or harder, on her than it was on us.  If I couldn’t laugh when my first post-divorce Christmas tree fell over (I had no clue how to secure it in the stand), I wouldn’t have been the only one crying—my boys would have cried, too.

By the end of Wishful Thinking, my heroine, Jennifer Sharpe, has to learn that if she is going to live happily ever after in real time, forgiving herself is step one. It’s a lesson I need to be reminded of every day too, though at times I still forget.