“I quickly learned that Huxley wasn’t the one who needed to change—it was me.” 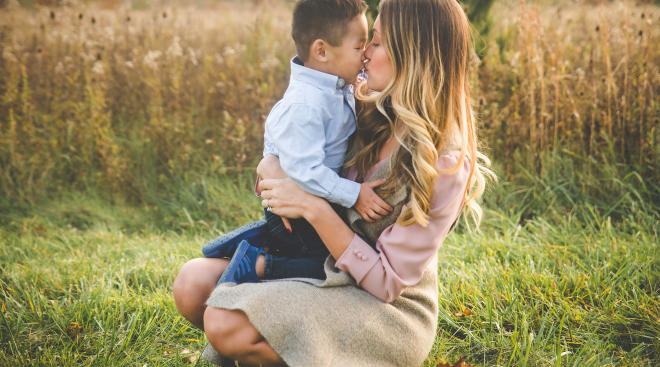 Editor’s note: Since writing this post in April 2019, Myka Stauffer and her husband James have decided to “rehome” their adopted son, Huxley, permanently placing him with a different family. "After multiple evaluations, numerous medical professionals have felt that he needed a different fit and that with his medical needs, he needed more,” she said in a video posted to YouTube.

I never realized how much of a perfectionist I really was until the first month of bringing my new son home. My husband and I had gone through hours and hours of training and classes to prepare for what adoption would look like and what struggles we might face, but nothing could have prepared us for our new reality.

In December of 2016, my husband and I decided to accept a file through our adoption agency, WACAP, for a beautiful one-year-old little boy who was diagnosed with a brain cyst. Over the next several months leading up to travel approval to go see him, we had mountains of paperwork and requirements that had to be completed in order to be his new forever family. All we had to go by was his adoption file describing his special need, a handful of pictures and a couple of videos of a little boy who lived halfway around the world. It was emotionally difficult knowing that if it weren’t for time-consuming paperwork, we wouldn’t have missed out on almost a year of our son’s life.

On October 5, 2017, the whole family boarded a 22-hour flight to China to meet our son Huxley. But when we finally saw him at the Children’s Welfare Center, we knew something was terribly off. We had been told that, at 2.5 years old, he spoke Chinese, could write Chinese characters for fun and was meeting all of his developmental milestones. WACAP noted he had a small brain tumor, but that it didn’t affect his cognitive abilities. But we saw behaviors first-hand that we couldn’t explain. In fact, Huxley didn’t understand Chinese and was profoundly developmentally delayed. He would violently bang his head against the wall and bite and pinch anyone who came too close, including his new siblings.

Many people tried to tell me it was just trauma or fear from having his entire life flipped upside down, and it would all fade away in a few weeks. That proved not to be the case—we waited and waited and never saw any change.

I remember holding this beautiful, dark-eyed little boy in my arms knowing our world was going to be very different, and wondering if this had been the right decision for my family. I was in a dark place with nowhere to turn and no one to talk to.

After taking Huxley to see several specialists, we discovered he had had a stroke in utero. The neurologist felt he was going to be a perfectly normal child and would “catch up” to his peers in no time. But months passed and we saw no change in his behavior, so we began to seek out resources for therapies that were recommended to us by our adoption center physicians. And every therapist that treated our son hinted at sensory processing disorder, autism, ADHD and global developmental delays.

Our fears were becoming a reality, and questions of doubt continued to creep into our heads. Would he ever be able to drive a car? Go to prom? Live independently? There were so many what ifs and unknowns that no one had the answers to. We leaned on Facebook support group and friends with adopted children to try to piece the puzzle together, since the help’d been getting was inconclusive.

We needed an answer. We needed a diagnosis to ensure we could provide our son with the proper resources to become his best self. So we signed him up to be tested for autism. The thing most people don’t realize is that health insurance typically doesn’t cover the expensive test, but without a confirmed diagnosis, city or state assistance isn’t available to you. To make matters worse, the wait to get tested can be one to three years. We were lucky to be on the shorter end of the wait, and when the results came back, we finally had our answer: Huxley had autism spectrum disorder level 3.

The emotional hardships we endured that first year prompted me to do some soul-searching and ask myself some really hard questions. Why am I so heartbroken over my new reality? I have a happy little boy who’s no longer living in horrible conditions, and that’s not good enough for me. What’s wrong with me?

I quickly learned that Huxley wasn’t the one who needed to change—it was me. One of the most incredible lessons my autistic son has taught me is to see the beauty in life. He showed me that stims, spins and flaps aren’t such a bad thing; they serve their purpose in a unique and beautiful way. And he taught me to quit giving a damn about what other people think. When people stare at you and judge your parenting skills, you have to learn to let those horrible looks and mean words roll right off your shoulder. Parenting a child with autism looks very different, and people don’t know how to perceive that. To be frank, they don’t have to understand—all that matters is that we’re doing what’s best for our family.

He’s taught me to ask for help when I need it, and to quit sitting around and sulking. He inspired me to join a support group so I didn’t have to walk this walk alone. Once you know you have a huge team of people going through the same thing, it all of a sudden doesn’t feel as hard. Perhaps most importantly, my son has taught me to love completely and unconditionally, regardless of circumstances and without exceptions. Love like there’s no tomorrow!

We still have some hard days. I still seek guidance and ask for help, and sometimes I still break down in tears. But the one thing I know for sure is that Huxley doesn’t go a day without being endlessly loved. Adoption is love. It takes lots of grit, sweat and tears, but it’s so worth it in the end! Even if your ending looks different than you had planned, just remember, “different” isn’t a bad thing.

Myka Stauffer is an Ohio-based mom of four (with a fifth on the way!) and YouTube family vlogger, where she shares the ups and downs of parenting.