One parent opens up about how past trauma shapes her parenting, and how she’s learning to not let her PTSD engulf the joys of raising her son.
Save article
ByNicole Cohen
UpdatedNov 2020 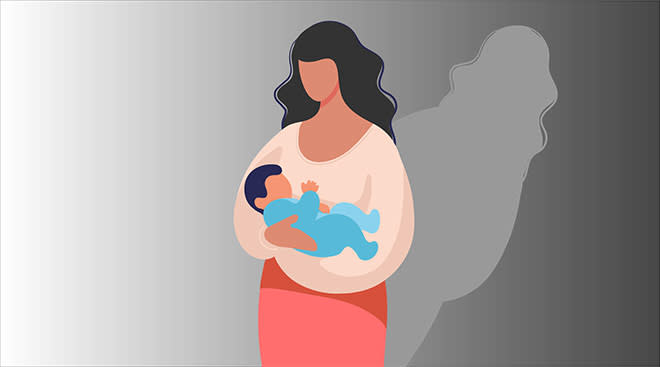 The grief and hope that comes with parenting a child who is the age you were when you first experienced trauma is overwhelming, painful but also healing and restorative. How do you parent as a trauma survivor? I don’t have all the answers, but here’s what I’ve learned during my journey.

Post Traumatic Stress Disorder is a new diagnosis for me. I am like many adults who experienced something traumatic in their life. For me, it was a violation of consent and boundaries as a child. A bundle of PTSD symptoms lay undiagnosed and mostly dormant, until recently. Looking back the signs began to emerge shortly after I found out I was pregnant in the fall of 2013. As my pregnancy progressed, I gave birth and watched my child grow, I felt increasingly disconnected and detached from my body. I experienced paralyzing hypervigilance, stress-induced migraines and seizures and I started experiencing flashbacks. It wasn’t until my son reached the age I was when I experienced the trauma that I really started putting it all together. I never told anyone what happened to me as a child—I didn’t think it mattered. And then the floodgates opened.

Like most parents, I hoped for an uncomplicated pregnancy and delivery. At 33, I was a bit overweight and had lived with seizure disorder since my late teens. I knew I was considered high-risk but that didn’t stop me from researching doulas, enrolling in a prenatal yoga class and trying to avoid an over-medicalized birth. In my heart something felt off—I didn’t feel in charge of my body. I didn’t understand why during my prenatal yoga class I felt no real connection to what was happening to my body. I couldn’t quite fathom the idea of a birth plan. I wrote these feelings off, chalking them up to a side effect of dealing with seizures as a teen and young adult in my sleep. I always believed subconsciously that my body was not my own.

Later I would learn that these were all symptoms of PTSD and could be traced back to my trauma. Throughout my very long pregnancy (41 weeks and six days!) and labor (sporadic for those last 10 days and then induced for another 24 hours or so), I never gained a sense of ownership over my body. I often felt threatened and at high alert around male healthcare providers.

After my son’s arrival, there were, what I recognize now to be signs of PTSD: I obsessively tended to his sleeping and eating patterns, which I later learned were hyper vigilant behaviors. I would constantly and exhaustively examine each of my parenting choices to determine if there was an opportunity to improve: Was he refusing to eat because the bottle was too hot? Did I pull the bottle away too soon? Had he been awake too long? Was he hot from being overdressed? I couldn’t make them stop. Every new-mom experience felt alien and overwhelming. I managed to continue functioning at a high level, but internally, I felt completely paralyzed. I desperately wanted to be a mom. I felt immense love for my son. But my body wasn’t engaging, leaving me feeling empty and increasingly worthless. It wasn’t sustainable.

Finding ways to compensate for my ongoing feelings of powerlessness became a theme. Initially, I dismissed my feelings and associated them with postpartum depression—which was in part to blame (I sought and received professional help for PPD). But the symptoms were all consuming, comprehensive and relentless. I was at a loss. And then one day it happened: I was running and a flash of an image jumped into view, followed by a sense of familiarity and terror. It was a flashback to my abuse and it shook me to my core. Soon after, I discovered a pattern of disengagement from my body, flashbacks and feeling frozen in relation to interactions with my son. For example, I could not bring myself to hold him around his torso as a toddler to get him dressed or get him strapped into the car seat. I didn’t know what was holding me back.

Things got much worse when my son turned five—the age I was when I was sexually abused. The fear and paralyzation increased in intensity and frequency. I knew how I should be parenting in a given moment, but I couldn’t physically do it. One weekend my son and I spent two days on the couch, eating little more than cereal and watching TV. I suffered a migraine, he was moody. We waded through the weekend in what felt like a dense fog. I knew my emotions were directly connected to my trauma, but I couldn’t understand why that revelation wasn’t propelling me forward. The moments when I felt triggered needed to be speed bumps on my journey, not brick walls that stopped me in my tracks. I needed to find a way to coexist and function with trauma.

With the help of a therapist and friends, allowing myself the space and permission to collapse and cry and ‘fail’ by many standards, I slowly started to look at things differently. I began to make space emotionally for my feelings (and still do). I began to offer myself grace (and continue to). And I started to believe in my own (and my son’s) resilience. Parenting my son through that age helped me understand and truly internalize that what happened to me was not my fault. This revelation aided in my ability to build a tool box of sorts to call on when the memories and emotions of my childhood trauma threaten to get in the way of my ability to parent or function.

I practice positive self talk: cereal is fortified! Milk has protein and fat. There is no imminent danger associated with being at home with your mom on the couch watching TV for a day….or two. I also remind myself that these situations and feelings of being stuck are not the entirety of my parenting experience. Now, when faced with a challenge, I review what improved from the last time I experienced a similar set of triggering circumstances—we watched less TV and talked more, and my body felt at ease more quickly. I am learning there is no switch to make this all better—these are emotional muscles I need to make stronger.

Now that my son is seven, his birth is no longer a story of defeat, it was the beginning of my body waking up, remembering my trauma and preparing me for this challenging and rewarding road to recovery. I am still working on self forgiveness and shedding the shame of what happened to me so many years ago. Trauma is a sneaky bugger. It seeks to erode my power as a parent. I’m pushing back. Ongoing symptoms like bouts of depression, frequent migraines, hypervigilance and feeling disconnected from my body are very real reminders that I’m not healed yet. But I’m making progress every day. I’m not going to let what happened to me steal the promise of parenthood from me.

My power is increasing and so is my confidence in my ability to parent. I am starting to view myself and my body together as someone’s parent. My son is wonderfully stubborn, weird, clever, demanding, emotionally astute and confident. No wonder asserting my power is challenging! But there is space for me here. I am a trauma survivor, fumbling through emotional speed bumps and gently pushing myself in pursuit of raising a resilient and emotionally intelligent kid. For the rest of you out there, the survivors, the moms, dads and parents with PTSD: You aren’t alone, we can do this.

Nicole Cohen, MSPH is a #workingparent in Brooklyn, NY. She is a #csasurvivor and an advocate for #ptsdawareness, especially among fellow parents and caregivers. When she’s not fumbling through parenthood, she’s building her own framework for healing from trauma where she is her own hero. She works in healthcare communications. And, yes. 2020 has kicked her butt.