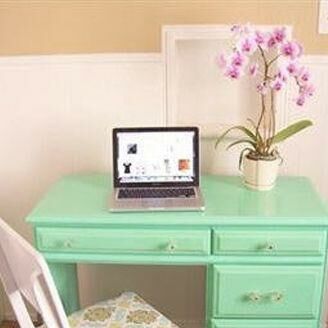 I have a love/hate relationship with Pinterest. On the one hand, I love looking at the pinboards people have created to showcase delectable recipes, funny quotes, and gorgeously designed rooms. However, if you’re not careful, Pinterest can send you into a delusional, DIY tizzy.

Before you know it you’re thinking, “I could totally do that. I could whip up a funky, modern coffee table out of reclaimed wood and tricycle parts in a single afternoon! Bring on the power tools!” Never mind that your most ambitious home improvement project to date was sticking decals on your kid’s wall. Can you see where this is going?

Now that my oldest son is in first grade, I decided he needed a real desk. He had fashioned himself one out of a toy workbench, which was both ingenious and a little pathetic. So I started looking around for a better solution. I suppose I could’ve just gone to IKEA or Target, but because I am so eco-conscious (and/or cheap), I decided I wanted to find an old desk and fix it up.

Well, one day I was out walking and happened upon the perfect desk at a yard sale. It was a kid-size desk with a ton of storage. The top opened up and there were bookcases on each side. It was covered in cobwebs and hideous chipped blue paint, but I could see past that. I saw potential, and by potential I mean I had seen what other people had done with old desks on Pinterest.

Now, I know people who can do yard work while their kids play nearby. I know people who can cook and clean and actually accomplish things while their children are awake. I am not one of them. Case in point: I tried to sand the desk while my boys played in the backyard, but they were far too interested in the electric sander. Plus, lead-based paint particles probably aren’t the best thing for kids’ lungs.

Next, I tried to paint the desk while they played in the kiddie pool. I think I got half of one leg done before my three-year-old decided it would be a good idea to jump off the deck into the pool. It wasn’t. I put down my paintbrush and went over to kiss his boo-boos. I would have to wait for a day when Daddy could take the boys out for several hours. It ended up taking two whole days — and two-and-a-half coats of paint — to finish that desk.

The results were worth it, though. The desk came out great and my son loves to do his homework on it. Now all I have to do is post a picture of it on Pinterest, so I can lure some other poor sap into an “easy” weekend DIY project.

Are you able to get things done when your kids are around? How do you do it?