Find out the latest, greatest, most-picked names for baby. 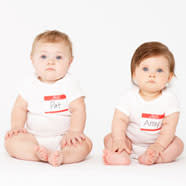 Wondering if your kid’s name made the cut? The Social Security Administration revealed the most popular baby names of 2011. Some of them look pretty familiar (Jacob is number one for the 13th year in a row). But one new name made it to the top this year: Mason is number two on the boys’ list for 2011 (maybe parents are taking a cue from Kourtney Kardashian’s son?).

There aren’t many shockers on the top 10 list this year, but the SSA also tracked some popularity changes for other names. Briella and Brantley were this year’s winners for the biggest jump in popularity in the top 500. Briella may be inspired by the blonde hairdresser on Jerseylicious and Glam Fairy. And Brantley’s popularity might come from John Brantley, a quarterback from University of Florida or country singer Brantley Gilbert. The second fastest rising boy and girl names are Iker and Angelique.

Is your baby’s name on the list? Do you like any of this year’s top 10 boys’ and girls’ names?

Top Baby Names of the Century [