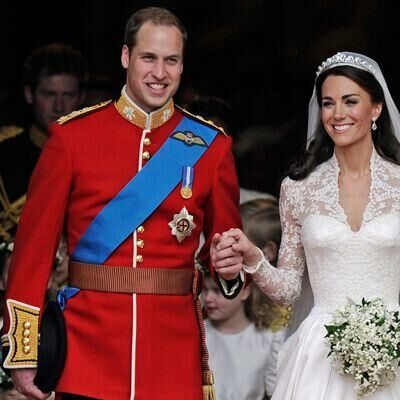 Prince William and Kate Middleton’s (er, Catherine, Duchess of Cambridge) first wedding anniversary is this Sunday, April 29th. Can you believe it’s been a year since that wedding craziness? I don’t know about you guys, but I watched all the royal wedding specials leading up to the main event and then I woke up at 4 a.m. for the viewing (and then I took a nap after!). My friend even DVR’ed it and we watched the highlights a few days later. Needless to say, I was a bit obsessed. It was hard not to get caught up in all of that excitement!

Now with all the tabloid on baby bump watch 24/7 for Wills and Kate’s firstborn — we’re wondering what they’ll name their kid when Kate gets pregnant. Will they go with traditional royal names like Charles, Elizabeth, Henry or Anne? Or will they go contemporary? Prince William’s cousin is named Zara, which is as contemporary as it gets for the royal family.

If you’re in the market for a baby name, why not name your kid something that’s fit for royalty? Here are a couple of monikers fit for the monarchy:

Happy first anniversary, Will and Kate! What do you think of these royal-inspired names? Will you give your baby a royal name, or did you give your child one of these names?