The former gymnast reflects on her first few months with daughter Drew Hazel. 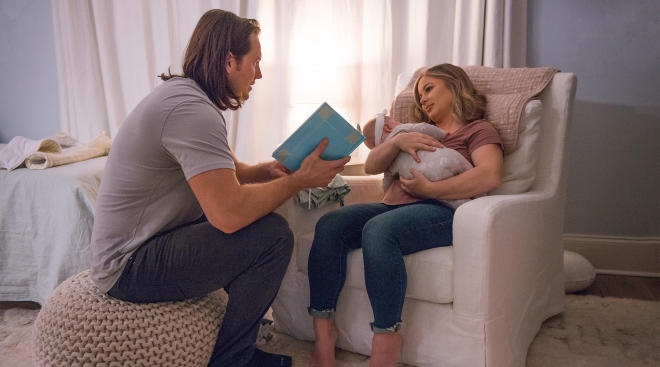 While there’s a lot you can do to prep for parenthood, you can never be totally prepared for the reality. After all, it takes time to get to know each other and adapt to new routines and a new dynamic—not only between you and baby, but in your relationship with your partner too. Such was the case for former Olympic gymnast Shawn Johnson East, who welcomed daughter Drew Hazel last October. We spoke with Shawn about what she’s learned since becoming a first-time mom—from making time for her husband to dealing with feeding struggles. Read on for her totally relatable lessons.

Scheduling time with your partner is key.

Shawn and husband Andrew East thought they had their seven-year relationship figured out—until Drew was born, that is. “It suddenly became this weird play of, ‘How do you split your time? How do you spoil your child and save enough energy to have quality time with your husband?’” Shawn says. “It’s a lot and no one really prepares you for it.”

To prioritize their relationship, the new parents began scheduling weekly date nights. Every Thursday, Shawn’s parents watch Drew for a few hours while she and Andrew go out for some alone time. On the other nights, they try to stay off their phones and do something together once Drew’s asleep, like watch a movie, play games, or even just read books in bed side by side.

Be ready to roll with the punches.

Throughout her pregnancy and Drew’s infant phase, Shawn was 100 percent convinced she was going to breastfeed. It went well in the hospital and during their first few weeks at home, but things quickly took a turn. “Suddenly, one day, she didn’t want to do it anymore,” Shawn says. “I didn’t know why and it became this emotional wrestling match every time.” She started pumping and bottle-feeding, which was successful. “It was night and day. Drew went from screaming and crying to super happy,” she says. But since she wasn’t producing enough breast milk from pumping alone, they started looking into formula to supplement.

Shawn and Andrew sought recommendations from their doctors and friends, and across the board one brand kept coming up: Enfamil. After further research, the couple decided on Enfamil Enspire. “It’s been a great option for her and provides brain-building nutrients similar to breast milk, which has made the transition from breastfeeding a bit easier,” Shawn says. “We can rest easy knowing we’re giving Drew Enfamil’s best."

You have to learn to accept each other’s parenting styles.

Spoiler alert: There’s inevitably going to be arguments about whose way is the right way to change a diaper, get baby to sleep through the night, or (later on) handle discipline. But you don’t always need to agree to be good parenting partners. “I feel like [Andrew and I] went into parenting thinking we had to be on the same exact page,” Shawn says. “But we’ve learned we can each parent differently and still respect each other’s ways.”

Sure, you and your partner may joke about who’s the “good cop” and who’s the “bad cop”(in case you’re wondering, Shawn is the strict one who likes to make sure Drew sticks to a schedule, while Andrew’s more laid-back), but what’s important is having "a mutual appreciation of each other as parents,” she says.

Have confidence in your parenting decisions.

It can be hard to deal with the unsolicited opinions that everyone from your mother-in-law to that random person on the street seems to have about how you choose to raise your child. Shawn says that when she started formula feeding, she definitely felt judged. “People were offering so many opinions saying, oh, ‘breast is best.’ And if you don’t feed her breast milk 100 percent of the time, she’s going to have a lower IQ and she’s not going to grow as fast,” she says. “I felt such fear during that transition process. I wondered, ‘Wait, am I actually doing something wrong?’”

But digging into the research and talking to professionals helped Shawn and Andrew learn to ignore the critics. “I know that [formula] is a great option for her and she’s not lacking anything,” Shawn says. “I’m confident in how I feed her and what our decisions have been.” And not only was Drew happier, it improved Shawn and Andrew’s relationship too. “Breastfeeding can be pretty isolating for the mom, because it’s only you,” she says. Now they share duties, with Andrew giving Drew a bottle while she pumps for the next feeding session.