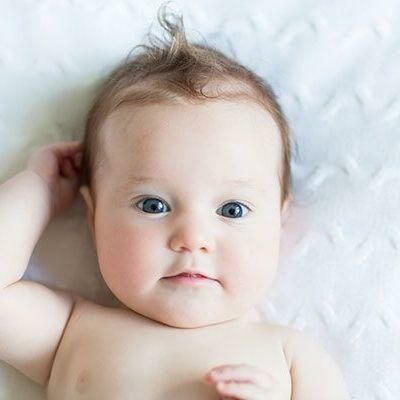 We’ve all seen babies wearing special helmets (maybe accessorized with a cute sticker or two) since flat head (scientifically called plagiocephaly ) is on the rise. However, a new study from BMJ (British Medical Journal) is saying that the custom-made helmets don’t prevent skull flatness and are a minimal treatment.

Lead researcher Renske M. van Wijk and other researchers at the University of Twente in the Netherlands studied 42 babies (aged five to six months) with misshapen skulls. They all wore the standard custom-made helmets that help round out the flat spots on their skull for 23 hours a day for six months. To compare data, another set of 42 babies with flat skulls went six months with no helmets.

After two years, the research ultimately couldn’t differentiate between the babies that wore helmets and the ones that didn’t. However, the team did report that the helmets could still be useful for babies with severely flattened skulls and tight neck muscles.

"I was very surprised at the results,” Mark R. Proctor, MD, an associate professor of neurosurgery at Boston Children’s Hospital, told the New York Times of the “rigorous” study.

Babies usually get plagiocephaly by positioning. Because babies’ skulls are so soft and flexible, spending too much time lying in one position could cause a flat spot on the side of his head that touches the mattress.

More severe cases are treated by the custom-made helmets to reshape the head, usually between four and six months-old for two to six months, 23 hours a day.

If your baby has a moderate to severe case of plagiocephaly, don’t let him or her lie or sit for extended periods of time. Anything that gets them off the back of their head helps, although it’s still extremely important for your baby to sleep on his back, since it drastically reduces the risk of Sudden Infant Death Syndrome (SIDS).

Try laying your baby in a slightly different spot in the crib each time to encourage him to move his head. However, you should always consult your doctor first.

If your baby has plagiocephaly, what did you do to alleviate it?