Tia Mowry, the 32-year-old actress best known for her role alongside twin sister, Tamera, on ABC/WB’s Sister, Sister, talks with us about the gender guessing game, balancing it all and, yep — even that nudie preggo pic. 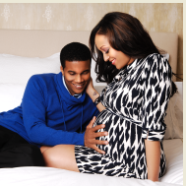 The Bump : How did you find out you were pregnant?
Tia Mowry : I knew something was going on when I didn’t get my period, so I went ahead and took a pregnancy test. I was so excited when I saw the positive sign that I couldn’t stop jumping up and down and crying. I actually was working in Atlanta at the time, so I was away from my husband [actor Cory Hardrict]. I called him right away, but he was in such shock that he didn’t believe me. I took a picture of the test with my phone and sent it to him for proof!

TB : How did you spill the news to your family?
TM : After I called Cory, I called my mom, dad, brothers and friends immediately. They were thrilled! It was really important for me to tell my sister in person, though. I wanted to see her expression when she heard the news. I had to wait two weeks until I got to see her, and believe me, it was _hard _to keep the news from her for that long! It wasn’t just hard for me, but my parents and brothers had to keep it hush-hush too. They were all so relieved once Tamera knew and we could all share our excitement.

TB : Do you know baby’s gender?
TM : It’s a boy! I _needed _to know the gender — I couldn’t wait to find out until birth. It was actually pretty funny because we were first told that there was an 85 percent chance that the baby was a girl. But during another ultrasound, the doctor said, “Wait a minute! That’s _definitely _a boy!” Luckily, we hadn’t bought anything for the nursery. The whole gender debacle is still in the back of my mind, so our nursery is a neutral pale yellow and buttercream, just in case!

TB : What have you been most surprised by throughout your pregnancy?
TM : I had _no _idea I would be this tired! I’d _love _to get 15 hours of sleep each night, but that’s not realistic. I can’t take the usual energy boosters I’m used to — coffee, energy drinks, etc. I take naps as often as I can, which is pretty hard since I’m still working. Eating greens has helped a little bit, but I’ve had to come to terms with the fact that I’m going to be tired.

TB : Have you received any great parenting advice?
TM : When you’re pregnant, you get so much advice that it’s completely overwhelming! Even strangers come up to you and share their two cents, and I’m like, Um, I didn’t ask! Of course, any advice is still helpful. But one of the best pieces of advice I’ve heard is to never be afraid of asking for help. That’s really hard for me because I’m so used to doing everything on my own. Parenting is going to be hard, especially since I’m going back to acting on my show, The Game. It’s going to be a challenge, but I know I can do it — I’m just going to take it one day at a time.

TB : Are siblings Tamera and Tahj [of Smart Guy] excited to be an aunt and uncle?
TM: Yes! Tahj was almost crying when he got the news, and Tamera is _obsessed _with my belly! Whenever we see each other, she never stops touching it! She told me she has dreams about him all the time.

TB : What are you most excited for about life with your son?
TM : I’m a kid at heart, and I can’t wait to relive my childhood through my son. I’m talking all the good stuff like going to the park, the zoo and, yep — eating cotton candy and ice cream. I can’t wait to live life through his eyes. I have so much love to give and can’t wait to share it with my son.

TB : We couldn’t help but notice your recent Demi Moore-inspired photo op. What inspired you to go public with a nude pregnancy pic?
TM : I’ve had a lot of friends who’ve gone through miscarriages, which made me realize that being pregnant and having a baby is a real miracle. I wanted to celebrate the whole experience of being pregnant. Time goes by so fast, and I wanted to capture this moment and celebrate its beauty. I feel sexy, empowered and strong being pregnant! I feel like I can do anything.

For more on the Mowry sisters, tune into Style Network’s new series Tia & Tamera Take 2, airing in August 2011, which will follow Tia through pregnancy and Tamera as she plans her wedding.

Plus, get the latest on all the celeb bump and baby announcements. These Hot Holiday Gifts From Etsy Are Now 20 Percent Off