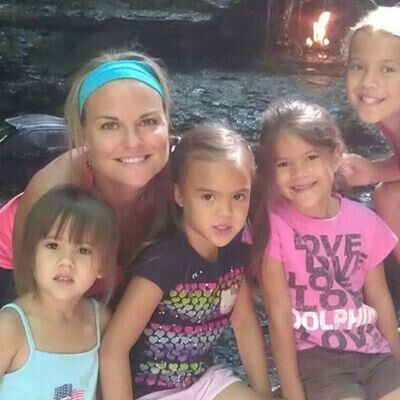 This isn’t your average pinky promise between BFFs.

When single mom Elizabeth Diamond was diagnosed with stage IV brain cancer in August 2014, she asked her best friend if she would take care of her four daughters if anything were to happen to her.

Laura Ruffino, pals with Diamond since fifth grade, didn’t hesitate for a second.

“I said, ‘of course’,” Ruffino, already a mother of two daughters, told ABC 7 Eyewitness News. “It wasn’t even a thought.”

Just a few months after the diagnosis, Diamond passed away, and Ruffino made good on her promise. She and her husband Rico took the young girls into their home.

The girls, ages 5, 7, 8 and 12, had been spending more and more time at the Ruffino household as their mom’s condition deteriorated. So after Diamond’s death, the couple hoped that their presence would ease the girls’ shock of transitioning into a new home.

Ruffino explains that the six girls in her house have all become fast friends and that “they fight, they share clothes, all those things.” Adding to the comforting normalcy, Ruffino’s husband Rico casually refers to Diamond’s girls as “my kids” already.

A  YouCaring page has been set up by the family in the hopes of raising money to help support their new eight-person household. They’ve already received $60,000 of their $100,000 goal.