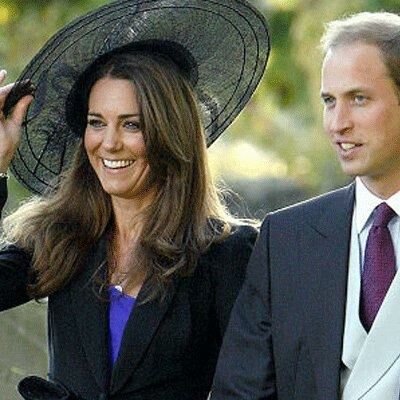 The royal baby is here and while we wait for a first glimpse (and name details!), there's a whole of royal firsts that await the heir to the British throne. Curious just what the royal little guy has been up to in his first day on earth? Allow us...

1. He made water turn blue. 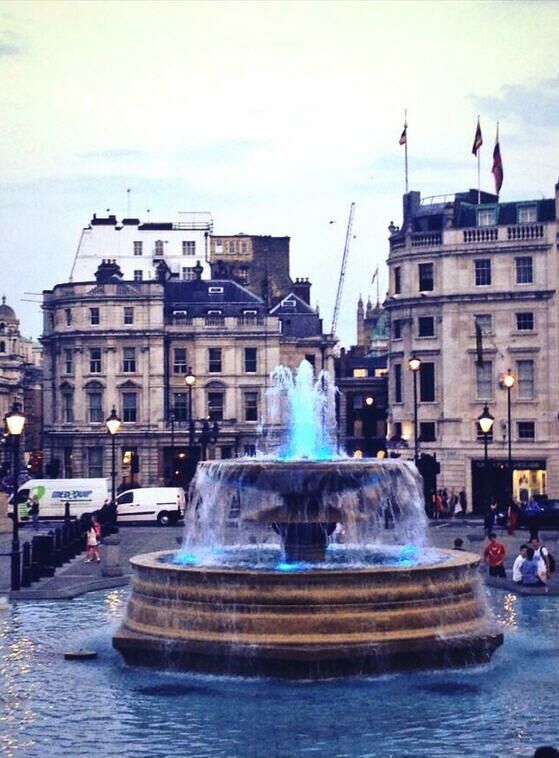 No, like, he literally made water turn blue. In his royal honor, fountains in London have added a new hue with blue lighting, in honor of the Duke and Duchess of Cambridge's royal arrival. 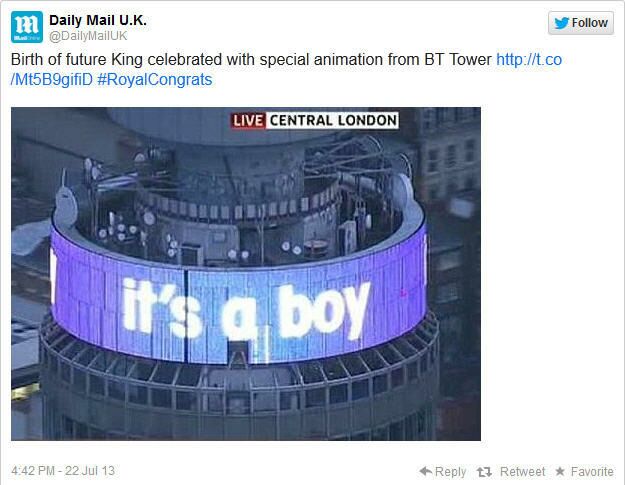 The Daily Mail UK tweeted a picture of the BT Tower (a communications tower located in Fitzrovia, London) with a special animation. The congratulatory welcome read "it's a boy!" from high up the sky. Apparently there's no such thing as privacy when you're a royal baby.

3. Thousands of people waited for him to be born. THOUSANDS.

How many people were at your birth? Not this many.

4. His birth announcement was hand-delivered to Buckingham Palace and placed on an easel. It is probably the most photographed easel of all time.

You know many people waited with bated breath to see this easel? In an age of IMs, iMessages, G-Chats and apps — we were waiting for a sign on a freakin' easel. This royal baby already knows how to work a room!

Sorry, moms, you may be feeding your babies the same way new mama Kate Middleton is but the only catch is you're not royal. It is being reported that Baby Cambridge will be breastfed by his mum, making every ounce of fuel that enters his body completely, unequivocally royal.

6. His potential circumcision will be a household conversation.

Talk about awkward. The circumcision rate in the U.K. is only 15.8, which means that Kate and Will could go either way. It's reported that Queen Victoria believed all the royal heirs to be direct descendants of King David, so snip they must. Prince Charles' circumcision was administered by a rabbi, but reports are that his wife, Princess Diana, chose to break away from the 150-year-old tradition and left her sons, William and Harry, uncircumcised. Imagine news outlets around the world discussing the status of your man parts. Shudder.

7. He's going to make bookies a lot of money.

Even before his birth, the royal baby-betting craze was already the second-biggest betting industry. It was second to only sports betting. Gary Burton, from Coral Bookmakers, said “It is the biggest novelty market we have ever seen.” So far, the Duke and Duchess of Cambridge have drawn a record number of bets for a non-sports market, worth more than 1.67 million so far.  “We did the Pope, we did reality TV and this is by far the biggest we have had,” said Burton. “It’s getting busier and busier the more it goes on and the more coverage it gets.”

8. He's the only person in the world who can get away with pooping in front of Queen Elizabeth.

9. He'll be the second royal to ever have been photographed naked.

Never one to be outdone, it looks like nudey-pants Prince Harry might have a future partner-in-crime in the making! The handsome royal shocked us all when photos of his fun Vegas vacation leaked to the press and showed the royal really letting loose and having fun. Granted, the royal baby won't willingly go naked like his famous uncle did, but we're willing bet new daddy William snapped a photo of his son moments after his birth to send off to family.

10. Thousands and thousands of gifs and memes have celebrated his much-anticipated arrival.

Truth be told, this is actually how I pictured the royal baby's arrival. Thanks, Buzzfeed.

Do you think Will and Kate will pose for photos with the baby upon leaving the hospital?