A Mom Shares: I Was So Proud to Watch a Couple Undergo IVF on Live TV 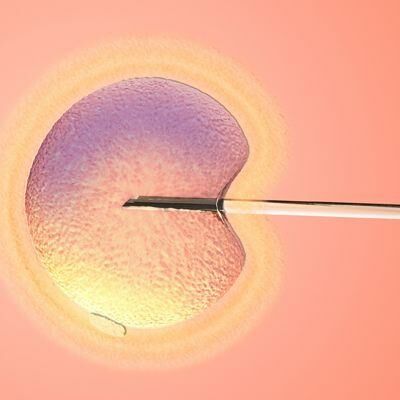 “This is one of the coolest things you’re ever going to see.”

That’s what Today Show medical correspondent Dr. Nancy Snyderman promised on yesterday’s show as the camera zoomed in on a needle injecting a single sperm into a freshly harvested egg. Touted as the first time conception has been shown on live TV, the segment was part of _Today’_s #BornTODAY series, which also includes a woman who accidentally became pregnant with another couple’s child (due to a mix-up at their clinic) and a number of live births.

An IVF mom myself, I was fascinating by the story of Jessica Menkhausen and Derek Manion, the engaged couple who opted to have their fertility journal chronicled on camera. I was sedated when my own eggs were harvested and didn’t have the opportunity to peek through the microscope as our reproductive endocrinologist ushered our embryos into creation. But did you watch the video? Who knew the outer layer of the egg was so tough?! (Snyderman highlights how much pressure has to be applied by the technician in order to puncture it with the needle).

I’m sure many viewers are curious as to what would prompt a woman to be go public with such an intimate topic. Jessica writes on the Today Show blog that her motivation is “enlightenment: It’s an amazing opportunity to enlighten other women who are having the same challenges. And it’s also a form of self-enlightenment — sharing my story is helping me deal with some of my own fears, by courageously facing them head on.”

Bravo to Jessica for opening up about this taboo topic. I, too, have written about our IVF rollercoaster, from humorous essays (yes, we did really visit a Parisian market seeking vegetable oil to use as sperm-friendly lube) to a story on life as a “Former Infertile” to a blog detailing my stance on Mississippi’s 2011 proposal to add a Personhood Amendment to their state constitution — a move which would have banned the freezing of embryos, meaning that IVF patients would be forced to insert all embryos created during IVF, even if that number reached double digits. I did all of this because infertility is such an incredibly lonely, isolated place, but if you allow yourself to open up — if you talk about it even a tiny bit - you’ll start to see that you’ve actually landed yourself a spot in an entirely non-exclusive club.

The moment I began writing about our struggle, women came out of the woodwork, revealing their own battles to me. Dozens of friends and friends of friends, and even a handful of editors, called, emailed or messaged me, telling me of their IUI babies, their Clomid toddlers and even their IVF failures. On the plane ride home from our Mexican babymoon, I struck up a conversation with the woman next to me, who was told she could never have kids, so she adopted a four-year-old… only to spontaneously conceive a few months later. Her biological daughter used IVF for all three of her sons.

In the locker room at my gym, I’ve chatted with a woman from my yoga class who had twin girls via surrogate, another who was in the midst of adopting baby #2, and another who had her daughter at 45 with assistance from the very same IVF doc who helped my husband and I. At my baby shower, I calculated that eight of the 20 or so women in attendance had used either Clomid, injectables, artificial insemination, IVF or adoption as a means of creating their family. Eight out of 20.

Publicly televising your IVF isn’t for everyone, and it’s certainly not for the faint of heart. But by doing so, Jessica and Derek are bringing hope and, yes, enlightenment to hundreds of thousands of anxious, scared women who fear they’ll never be able to conceive. I am so pulling for them — this is their “once in a lifetime chance at parenthood,” as they have spent their savings on a single cycle and can’t afford to do it again (they’ve even put their wedding on hold).

Hopefully they will be able to pick a lullaby for the first dance at their reception.

Do you think it’s important to talk about infertility?

More IVF-ers Are Getting Single-Embryo Transplants

What Is GnRH Agonist?

Sunlight Boosts IVF Success by Over A Third

Couple 'Practices' Parenting With Their Cardboard Box of Embryos

What Is Ovarian Hyperstimulation?