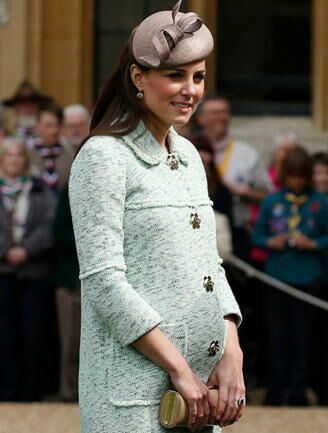 Sounds like mum-to-be Kate Middleton just pulled a Beyonce, y’all! While the palace preps for the royal baby , details continue to slowly seep out that give the general public candid clues as to just what’s happening beyond the palace walls — inside Kate’s delivery room and into her reported birthing playlist.

The Duchess, who’s due just about _any _day now, will reportedly deliver an heir (or heiress) to the British throne in the lap of luxury: a posh birthing suite in the Lindo Wing at St. Mary’s Hospital in London, where Princess Diana welcomed both William and Harry into the world. Even though it’s been more than 31 years, the Lindo Wing is still as chic and fabulous as ever. While on maternity leave, Kate’s apparently been busy putting together the perfect playlist to play as she delivers baby.

Each room in the Lindo Wing is decked out with a satellite television, radio, safe (yes, really), a bedside telephone, Internet access and a fridge. Additionally, patients also have their choice of a daily newspaper each morning during their stay, ripe right off the presses. A dedicated hotel service team also provides a thoroughly nutritious menu that caters to the dietary habits and restrictions of each patient. Wines are also served to new parents as well as a champagne toast in honor of their child’s arrival. The hospital boasts “total peace of mind” for each patient during their stay. On the hospital’s website, they describe St. Mary’s as a “general acute hospital that diagnoses and treats a range of adult and pediatric conditions.” But what it should really say is, ‘Specializing in the safe care and delivery of Royal Babies since before the beginning of time.’ According to The Guardian, a $8,600 deposit is required to reserve your "normal" delivery package, though consultant a la carte fees are not included. Every 24-hour stay beyond what your allotted costs $1,560. As of right now, the odds are that Kate’s stay could run up the meter to at least $15,659.

In comparison, Beyonce’s suite stay at Lennox Hill Hospital cost upwards of $5,250 for three-nights postpartum (no word yet on whether she and Jay Z really spent over a million to rent out the whole floor). At Cedars-Sinai Hospital in LA, moms like Kim Kardashian and her sister Kourtney rented out posh push rooms for a little over $4,000 a day.

So, with all the hype surrounding these luxury birthing suites for celebrities, should all moms-to-be consider shopping around for a luxe delivery room of their own?

There’s nothing wrong with wanting to deliver baby in a tranquil, quiet and utterly serene environment, so if you can afford to do it, we’re all for it! It might cost a pretty penny but to some moms-to-be and their families, it’s money well spent. Some of the amenities women enjoy in posh push rooms? Privacy — and lots of it. In your own room, there’s no one lurking just beyond the cloth curtain and better yet, no one to share a bathroom with. The only noisy and overly-excited family members you’ll have to worry about are your own, so you won’t have to feel bad when you kick them out to the waiting room so you can get a few hours rest while baby sleeps.

The food is often better and depending on what your hospital offers, there might even be room service.  Some rooms might even come with more windows, better lighting and better future.

Alternatively, other women would rather not pay the extra money for all those first-class amenities. Moms-to-be might prefer a gorgeous push present after birth instead, or a weekend getaway slated for a few months down the road. Whatever the reason, it’s totally normal for moms to rather not want all the extra attention before and after delivery. Second and third-time moms who are delivering another already know the lay of the land and are perfectly okay sharing a room and bathroom with another woman.

One of Will and Kate’s friends shared that to ward off some of those pre-delivery nerves, Kate’s been cramming her iPod full of music that she wants to listen to when she’s in labor. The source said, “the other day she downloaded some of Bruno Mars, Calvin Harris and Of Monsters and Men.” We also wouldn’t be surprised to see a little Ellie Goulding on that playlist, either. In 2011, Ellie serenaded Will and Kate just after their wedding at their royal reception. Classical artist Paul Mealor also penned a song for the parents-t0-be entitled, “Sleep On”, a lullaby to “accompany William and Kate on the next stage of their royal journey together,” Mealor said in a statement.

Because Kate can’t plan exactly how her labor will progress, prepping a playlist ahead of time might help keep her calm and distract her. Studies have shown that music, by promoting relaxation, can help cut down on pain. Kate will definitely want to include calming songs from artists like Enya and Ellie, a pump-up motivational song (“Eye of the Tiger”, anyone?) for handling those contractions and a push song. If we could suggest a few of our own recommendations, we’d definitely include “Final Countdown” by Europe as the song to play right as baby’s born.

Did you have a birthing playlist? What songs were on it?