And it's designed exclusively for Economy.
Save article
ByAnisa Arsenault
Associate Editor
PublishedMar 2018 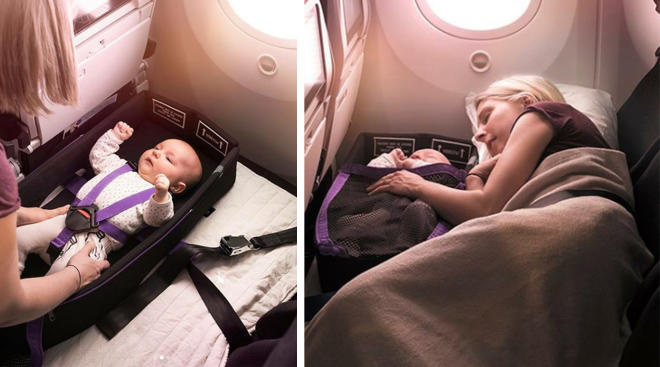 If you’ve been hesitant to book a vacation because of the trials and tribulations that come with taking a small child on a plane—your time has come. One airline is adding baby- and toddler-friendly seating to its economy section, giving your family more space to safely and comfortably enjoy your flight.

Okay, so for right now, you’ll have to go to to New Zealand. Air New Zealand is expanding on its Skycouch, a row of three Economy seats that convert into a flat surface, initially introduced in 2011.

"While we initially marketed it to couples, we quickly found the product suited parents with young families especially well,” says Air New Zealand General Manager Customer Experience Anita Hawthorne in a press release. “Parents can relax while their children are able to have their own space and flat area to play without interrupting other passengers.”

Here’s how it works: A Skycouch is just a row of Economy seats with additional footrests that fold up to form a couch. Simultaneously, it allows armrests to fold away. Use it to stretch out, set up a play area, or sleep; pillows and blankets will be provided. While seat belt extensions have always been provided for adults who want to lie down, now, a dedicated infant harness and belt will allow infants and toddlers to remain lying down, rather than on a parents’ lap, while the flight is in cruise mode.

Infants can also get their own pods for added protection.

If a flight has the new Economy Skycouch feature available, you’ll see the phrase ‘Skycouch on board’ beneath the price. You can add different variations of the Skycouch to your Economy fare, including one Skycouch, one Skycouch plus an Economy seat or multiple Skycouches. Depending on your travel route and the configuration you choose, upgrading to Skycouch will cost somewhere between $300 and $800.