Mom in Airport Was Instructed to Pump in ‘Pet Relief Area’ 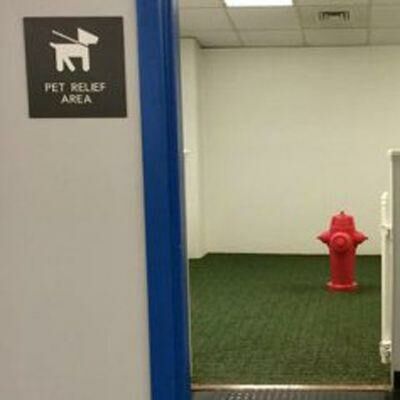 The first option she was offered: the family bathroom. But a lack of an electrical outlet and overall unsanitary conditions meant that space wasn’t going to cut it.

“There was a red fire hydrant in there for dogs to relieve themselves. That’s obviously not where I’m going to pump my breast milk for my baby,” Cooper tells CBS Boston.

Cooper settled on the public terminal.

“I cant believe that in 2015 this is happening," she says. “I’m not looking for free drinks, I don’t want a free meal, I don’t want your Wi-Fi, I don’t want anything. I just want a secure private location for 15 minutes to express my breast milk then I will be on my merry way.”

Many airports do have a secure private location, thanks to services like Mamava’s lactation pods by Seventh Generation. The freestanding booths, available in all New York City-area airports, are large enough to accommodate luggage and a stroller. They include outlets and a fold-down table for a breast pump and comfortable, cushioned seating.

“We’re sorry for Ms. Cooper’s personal experience, but glad she is speaking out, as her challenge is shared by millions who deserve better choice,” says John Moorhead, brand manager at Seventh Generation. “We applaud United for moving quickly to rectify the situation. Seventh Generation and Mamava have successfully solved this challenge in several airports across the country with the installation of pumping and nursing pods, and we’d love to see Dulles join us in this progressive effort to care for traveling moms.”

United Airlines has apologized to Cooper, and Dulles announced plans to add a pumping location. Smart move. Because when moms are relegated to inappropriate areas to pump and breastfeed — like the woman recently directed to a Marshalls bathroom — you can bet the public is going to hear about it.