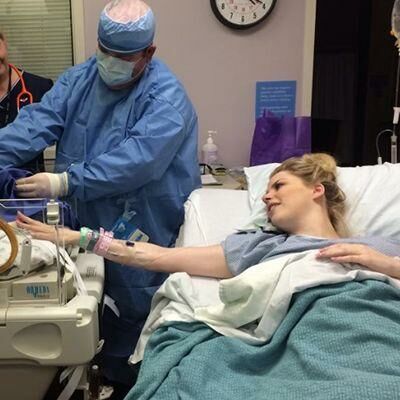 The Gardner quadruplet saga has a happy ending: all four babies were born healthy on Sunday.

“Mommy is feeling good after the C-section! All 4 babies have dark hair!!” their  Facebook page said. The page has kept the family’s nearly 300,000 followers updated on every step of the journey, from October’s emergency surgery to correct twin-to-twin transfusion syndrome to the name reveal last month.

Although Ashley wasn’t due until March 11, doctors expected her to deliver somewhere between 28 to 34 weeks. When Ashley had her c-section at Utah Valley Regional Medical Center this weekend, she was at 29.5 weeks. Hospital spokesperson Janet Frank says Ashley will likely be discharged within three to fives days, but the babies — each weighing in around two pounds — will remain in the NICU for two months. And they’ll be receiving a whole lot of attention; each baby will be cared for by a nurse, a respiratory therapist, a nurse practitioner and a neonatologist.

“Our NIC unit is set up with a model to involve the family as much as possible,” Frank said. “Staff will involve them in anything and everything they can.”

And we expect Ashley and Tyson will involve their fans in as much as they can. Stay tuned for more Facebook updates.