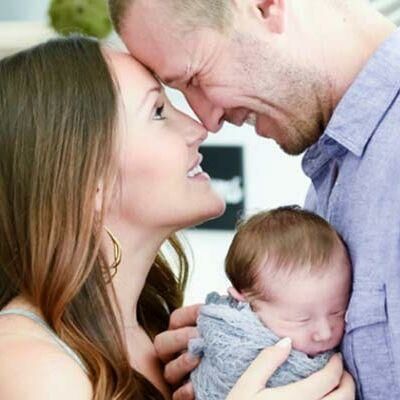 Fordham Rosenbaum may be two weeks old, but he’s already joined his parents, The _Bachelorette _stars Ashley Hebert and J.P. Rosenbaum, for his first photo shoot. And we’re enamored.

Look at those eyes!

“He is such a good baby! He sleeps well, he eats well, he’s healthy and happy,” the couple tells  E! News.

The new parents are totally smitten not only with Fordham, but with one another. “Seeing J.P. as a father has made me love him even more,” Hebert says.

And Rosenbaum feels the same, saying, “Ashley was born to be a mom. She has such a motherly way about her. She is totally in love with this child and it shows in every ounce of her being. She is just glowing.”

To cap off their delirious happiness, the family also debuted an unbelievable nursery. Designed by Vanessa Antonelli, the travel-themed room features modern furnishings (Oilo bedding and Nuna Leaf bouncer) and wanderlust touches like maps, sailboats and airplanes — all of which are a nod to Ashley and J.P.'s memories of traveling together.

Check out these adorable photos — taken by Christina Mendoza of Tutti Bambini Photography — and keep in mind that this likely won’t be the last newborn photo shoot from the couple. “We are going to enjoy this one for a while, but we both feel it would be nice to give Ford a brother or sister,” says Hebert.