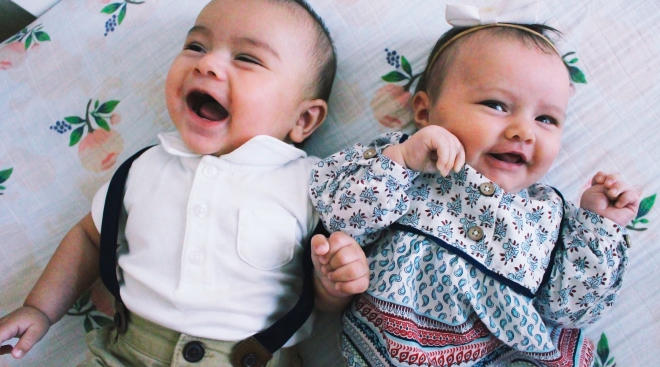 Talking with your baby—responding to noises, making eye contact and narrating activities—is the best way for you to encourage baby speech development. But it might not be the best way to encourage baby speech development overall. New research shows babies pay closer attention to sounds made by other babies, which may help motivate them to become vocally active themselves.

In an experiment conducted by professors from McGill University and the University of Quebec in Montreal, 5-month-old babies spent 40 percent longer listening to sounds from babies than adults, even when those sounds were the same vowels.

“Access to infant speech, likely including a baby’s own vocalizations, seems to have a broad and significant impact, influencing receptive, expressive and motivational aspects of speech development,” McGill University’s Linda Polka says. Her team used a synthesizer to recreate vowel sounds that come from a human mouth, adjusting it to reflect the pitch and resonance of any age.

At first, researchers assumed babies would respond the same way when a woman’s voice mimicked the high pitch of an infant voice, since many mothers speak this way when communicating with their babies. But high pitch alone wasn’t enough to hold baby’s attention. The study says the “unique resonance properties” that come from tiny talkers are what really keep babies tuned in.

To track how long babies paid attention to vocalizations, researchers sat them in front of a screen with a checkerboard pattern while the sound played. If they diverted their attention from the pattern, the sound stopped.

Of course, none of this means you should stop babbling back at baby. But it suggests exposing baby to other infants is a great developmentally-friendly idea.

“Infant speech seems to capture and hold infant attention, sometimes prompting positive emotions,” Polka says. “This may motivate infants to be vocally active and make it easier to evaluate their own vocalizations, perhaps energizing and supporting spoken language development."