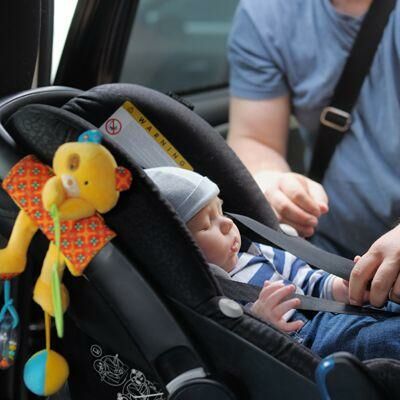 When used properly, car seats are life-saving pieces of baby gear no parent would dream of not having. But for one Oklahoma family, a car seat tragically proved deadly.

At 11 weeks old, Shepard Dodd was put to sleep in an unbuckled car seat, placed on the floor in a home day care center and left in a room unsupervised. When a day care operator checked on him two hours later, he was reportedly blue.

Local news channel KFOR says Shepard was rushed to the hospital, where parents Ali and Derek Dodd met him, but it was already too late.

“I was able to kiss him on the forehead as they wheeled him in,” Derek said. “He was cold. So I knew it was coming.”

How did this happen? Shepard’s death was the result of positional asphyxiation. Car seats, bouncers, swings, strollers and infant carriers are not deemed safe places for babies to sleep for extended periods of time. Although studies have found young infants spend 5.7 hours per day in a car seat or similar sitting device, the AAP warns of risks of potentiate gastroesophageal reflux and positional plagiocephaly: “Because they still have poor head control and often experience flexion of the head while in a sitting position, infants…in sitting devices might be at increased risk of upper airway obstruction and oxygen desaturation.” A proper sleeping position? Baby laying flat on his back.

While this incident occurred on April 6, it’s gaining publicity now since it’s taken months to shut down the facility.

The day care’s license has been revoked, but in the months following Shepard’s death, parents would have had a difficult time finding out anything happened at all. On the date of his death, public records only indicate the following noncompliance: “Child was placed in a car seat to sleep.”

“What it says on there for our incident…it says she allowed a baby to sleep in a car seat. It doesn’t say anything about him dying. Even parents wouldn’t even know that he died in her care,” Ali says.

Just 11 days before, the facility received a citation for allowing infants to remain asleep in car seats.

“It is unthinkable that these choices were so easy to make,” says Ali. “That she knew better. She was counseled just days before by DHS. She had had a violation eleven days before.”

Still, the Oklahoma County District Attorney hasn’t filed any charges, since Sudden Unexplained Infant Death is the official cause of death on the coroner’s report.

Derek and Ali Dodd will go to the State Capitol next week to lobby for change and safer infant sleep standards statewide.

The Not-So-Scary Reason for the Graco Car Seat Recall

'if I Did This, Anyone Could Do This': Mom Speaks Out After Leaving Toddler in the Car

Diono Recalls Over Half a Million Car Seats