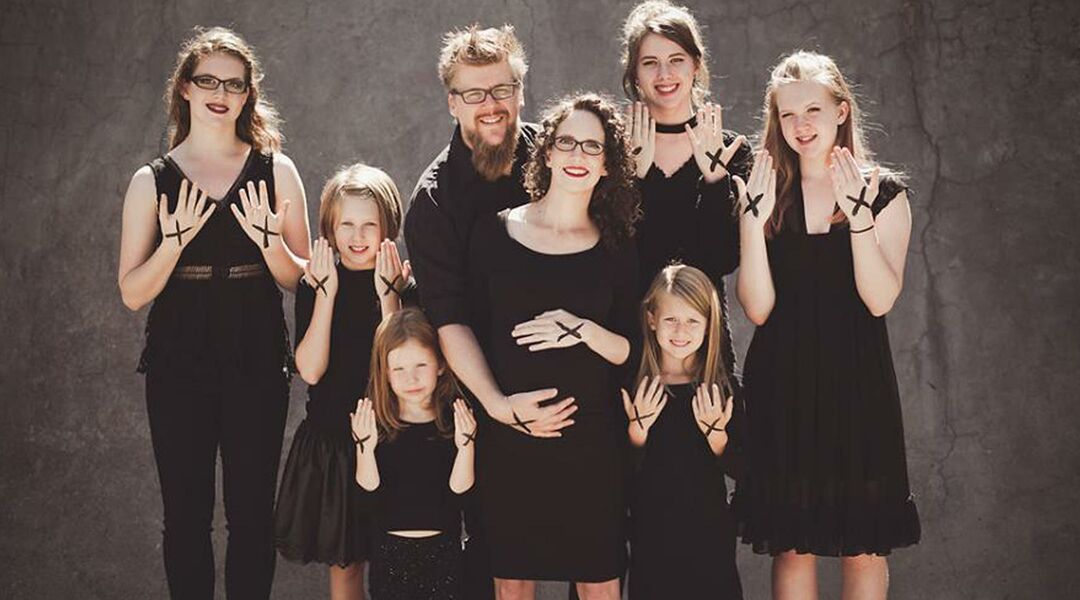 As a mom of six girls, Jessica Martin-Weber has heard it all. And with a seventh girl on the way, she doesn’t want to hear any more. Together with her daughters and her husband, she posed for a gender-reveal photo shoot that explains exactly what not to say after someone tells you the sex of the baby they’re expecting.

“We have reached a point of burnout on people making insensitive comments about our family ‘needing a boy,’” Martin-Weber says on Facebook. “Though we know people mean well and aren’t intentionally being insensitive, our children in particular (six girls) are worn out, frustrated and hurt by the constant pressure that somehow we must be disappointed to not have a child with a penis in the family. From our youngest (5yo) to our eldest (18yo) these conversations are overshadowing the enthusiasm of a new person joining our family and we’ve decided to do the reveal now to give us a few weeks to focus on the coming birth and to get a break from this particular issue.”

In the photos, all the ladies wear an ‘X’ on each hand to signify the female chromosome: XX.

After reminding readers that sex is just “one little piece of information” about the identity of a child, Martin-Webber lists a few of the negative comments her daughters have heard over the years about coming from a family of so many girls, like this one:

“A bank teller once called [my husband] Jeremy a ‘poor thing’ in front of all our children when she learned we were expecting another XX and told him she was sorry for him surrounded by all those girls and how it must be so hard for him to not have a boy. This led to our then 9-year-old apologizing to her daddy that she wasn’t a boy.”

• “I was in the Denver airport the other day with my husband and our three daughters. A man decided to get in my business and said, ‘Wow, couldn’t give him a boy, huh?’ I was so upset; it put a damper on the rest of my day.”

• “I had literally just given birth to me third girl almost seven weeks ago we chose not to find out the sex. A staff member came to see what we’d had because it’s rare to have a surprise, she said. Once we said it was another girl she said, ‘Oh, well you can always try again.’"

• “I have two boys and people always feel the need to tell me I have to try for the girl. I was told this days after I gave birth to my little one. It’s unbelievable how intrusive people can be.”

• “We have all girls too (four) and have gotten lots of the same or similar rude comments. It’s aggravating. I hope that people are just trying to be conversational and don’t realize all his beloved daughters are listening when they say ‘poor dad!’”

• “I have three boys and my favorite comment so far has been the older woman who told me that I needed a girl because ‘a boy is a son until he marries and a girl is a daughter for life.’”

Martin-Webber, like a lot of these mothers, knows people don’t mean to be rude, and knows people may view her as sensitive. But her point is that people need to think before they speak. Trying to make conversation should never devalue another person.

“We know that some think we’re dramatic or overly sensitive but after hearing things like this for 17 years, we’re just sick of it and frankly see no reason we should ask our children to put up with people being unintentionally rude and insensitive with thoughtless statements that at least indirectly question our daughters’ worth,” she says.