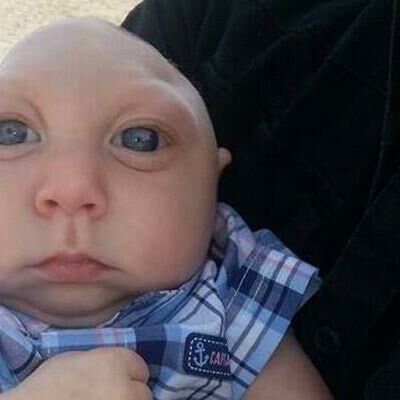 At fourteen months old, Jaxon has outlived everyone’s expectations. And when he started to utter “mama” and “daddy,” he blew them away again.

The reason? Jaxon was born with a shrunken head and severe brain malformation. The official diagnosis — which took months to get — is microhydranencephaly. He has no cerebral cortex and his cerebellum, which controls balance and coordination, didn’t form properly. His brainstem, responsible for motor skills, is thinner than it should be and he shows little sign of brain activity. There is nothing that can be repaired and there is no cure.

Yet despite these developmental obstacles, Jaxon is hitting his milestones, like sitting up and reaching and grasping. He’s a happy baby boy; it’s just unclear how long this will last.

He’s a happy baby boy; it’s just unclear how long this will last.

Parents Brittany and Brandon Buell have been aware of and prepared for complications for quite some time now. The diagnosis during pregnancy was spina bifida. But after Jaxon’s emergency c-section on August 27 last year, they knew it was something else.

“It was a bit startling and sobering. I looked at his head,” Brandon tells Boston.com. “I tried to prepare [Brittany]. I said, ‘Just so you know, his head is small.’ And I just thought: ‘Wow this is a real situation, and we have no idea how this is going to go.’”

Jaxon was re-diagnosed with anencephaly , a neural tube defect in which parts of the brain and skull are missing. “They sent us home with hospice,” Brittany says. “[The doctors] assumed he would peacefully pass away. But I canceled hospice within a week.”

The months that followed were by no means smooth sailing; Jaxon was hospitalized for feeding tube issues and viruses. But things took a turn for the worse this summer. After gastrointestinal issues, sleep problems and seizure-like episodes, the Buells headed to world-renowned Boston Children’s Hospital.

“Our plan was to go to the emergency room because they can’t turn you away,” Brittany says. “We walked in and said, ‘We’re here from Florida.’”

The diagnosis was adjusted yet again, to microhydranencephaly, and although it sounds scary, it’s a bit of a relief to the Buells.

“It’s really helpful to finally have a diagnosis that makes sense,” Brandon says. “We would not have that if we hadn’t come to Boston. We came to Boston hoping to find a way to add something to the quality and comfort of his life.

In the meantime, the Buells will be working to maintain that quality of life for Jaxon with his new medication.

“Normal babies with their normal size heads? They look weird to us," says Bradon.