This Baby Meeting His Teddy Bear Will Make Your Monday (WATCH!) 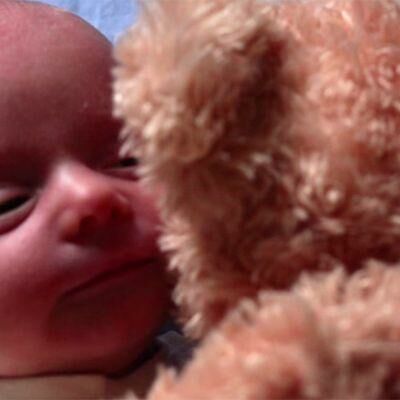 If you’re into adorable babies /stop-motion videos, you need to watch this clip to make your Monday infinitely cuter. Minneapolis couple Chris and Aimee Knutson , who met while working in theater, ordered a teddy bear before their first child was born and didn’t plan for it to just sit on a shelf — it was going to star in a video (that’s already gone viral).

“My wife and I have talked about doing stop-motion for a while so when the bear came it was just like this is the perfect time,” Chris told ABC News. “So it’s our first child and our first stop-motion film too. We went scene-by-scene and thought of our process preparing [to be] parents and how the bear could be observing that, like the pregnancy test, putting the crib together and seeing the ultrasound."

After staging and editing all of the footage, it took nearly 60 hours to make the clip — that includes baby Henry David Knutson making his first video appearance with his bear (which he’ll name himself one day) from the crib. Want to see more of this adorable duo? You’re in luck.

“We plan on having the bear and Henry make these videos throughout crucial steps of Henry’s growth,” Chris said.

What was your baby’s first stuffed animal?