A Baby Selfie Toy That Posts Pics on Facebook: What Do You Think? 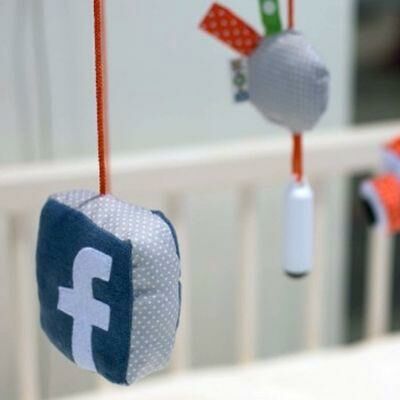 You know when you check your Facebook feed, sometimes it’s flooded with photos of your friends and their babies — celebrating a milestone! Enjoying apple picking! At the pumpkin patch! Showing off their Halloween finest! Some find these images sweet; others not so much. And then there is the baby to consider: how come he/she doesn’t have a say in whether they want their photos shared on social media.

Dutch designer Laura Cornet has given the topic a lot of thought. “It’s weird to be involved in the life of someone who doesn’t even know I have already seen everything in their life,” she tells  CNN. So she decided to spark a debate on who has the right to post photos of a baby online.

Cornet designed a mobile complete with soft toys shaped like the Facebook logo and Twitter bird. The mobile, called “New Born Fame,” takes a snapshot or video when baby reaches for it in the crib, and automatically posts the images to social media. Voilà: baby selfies.

The toy, which served as Cornet’s graduation project at Eindhoven Design Academy, sparked a lot of reactions — exactly what she hoped. Some were angry about exposing infants to social media. “It was proving my statement, I was really happy,” she says.

Selfies or not, baby photos are flooding social media. Of the 62 percent of moms with children under three who use Facebook, 96 percent post photos of their kids, according to a study by Microsoft Research.

The Best Family Board Games for Toddlers and Up

21 Best Toys for Kids With Autism

The 25 Best Christmas Books for Kids

20 Kids’ Gardening Tools and Toys for Your Little Sprout

What Should My Toddler Do While I Shower?