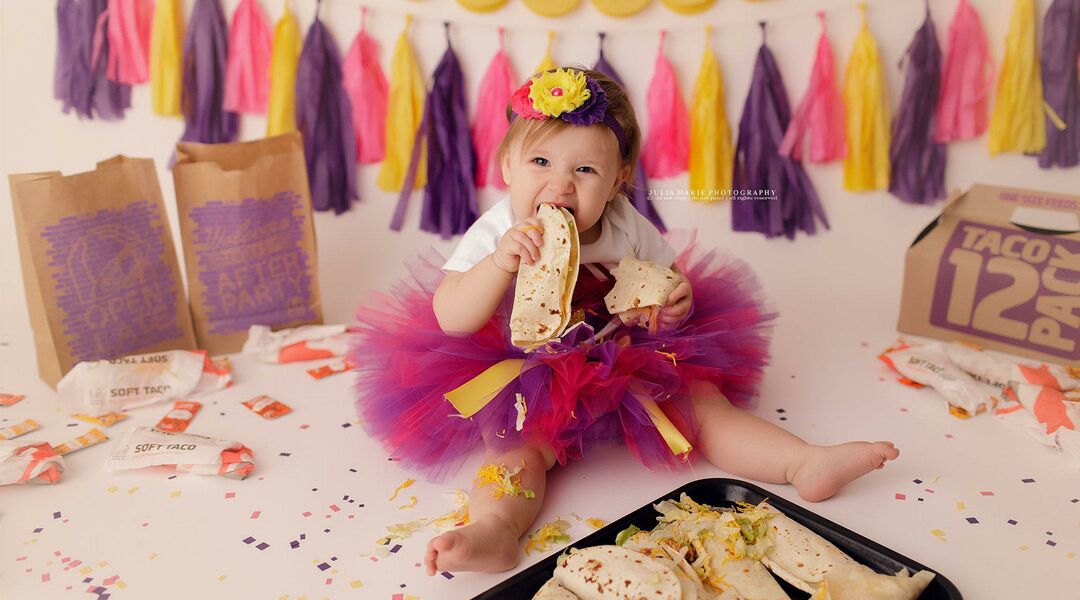 When we published a first birthday food smash story with ideas other than cake, we learned something: You guys went nuts for tacos. So when we saw another first birthday fiesta, we had to taco bout it. Especially because these weren’t any old tacos—these were Taco Bell tacos!

Baby Delta rang in her first birthday with a Taco Bell smash shoot, because, live mas. Monica Hoff, Delta’s mom, explains that after seeing a donut smash online, she thought it would be cute to have a Taco Bell shoot since her family members are big fans. Behind the camera was Julia Marie Photography, a friend of Hoff’s and fellow taco-enthusiast.

While a love for Taco Bell is pretty universal, not all of can say that our waters broke in the Taco Bell drive-thru. “My husband handed me our bag of Taco Bell food and I looked at him and said, "Uh oh, we gotta go,” Hoff tells The Bump , reflecting back on when she was pregnant with Delta’s older sister. Now that’s a memory you can’t order off just any fast-food menu!

Check out the photos from Baby Delta’s fiesta below. She dressed for the occassion in a Taco Bell shirt and tutu.

Clearly, this baby loves tacos. Cheese roll ups and soft tacos are her favorites, according to Hoff.

Yep, Baby Delta is all of us. “I had mom (Monica) set the tray of tacos down in front of Delta and she dug in and went to town,” the photographer says.

If this is a new trend, we’re okay with it.