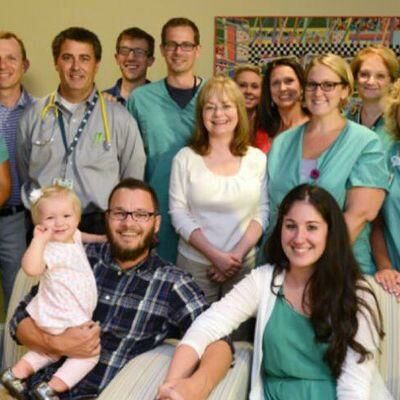 Baby’s first birthday is an important milestone and celebration of life for any parents. But for North Carolina mom Shelly Cawley, it’s also a one-year celebration of her life.

Last September, then-23-year-old nursing student Cawley experienced complications during labor that resulted in an emergency c-section and left her in a coma. And it’s because of her daughter Rylan Grace that the new mom woke up and survived after an unresponsive week in the ICU.

During pregnancy, Cawley was diagnosed with a blood clot in her leg that moved to her heart after Rylan was delivered, filling her lungs with fluid, giving doctors no choice but to put her in an induced coma to try and stabilize her weak vitals.

Running out of options that could save Cawley, her medical team decided to try one last resort. “The mother-child bond is incredibly strong. I thought it might make a difference if Shelly’s subconscious could hear and feel her daughter,” Dana Bush, MD, the obstetrician involved in Cawley’s care told Carolinas HeathCare System News.

Nurses placed the naked newborn on her comatose mother’s chest to see if baby’s touch and cries would evoke some kind of response. "We're a big proponent of skin-to-skin [contact],” Cawley’s nurse Ashley Manus tells PEOPLE. We believe it has great benefits for the mom and the baby, and we just thought it can't hurt, might as well give it a try.”

Sure enough, Rylan started crying, and Cawley’s vitals spiked on the monitor in response. It took another week for Cawley to fully wake up from the coma, but she, her husband Jeremy and the medical staff credit baby Rylan for bringing her mom back to life.

Now, one year later, Cawley is still in awe of the gift her daughter has given her. "I just look at her now and think of the amazing bond we have. I can tell her when she grows up that she saved my life," Cawley tells PEOPLE.

Watch the emotional first meeting between Shelly and her daughter Rylan below: