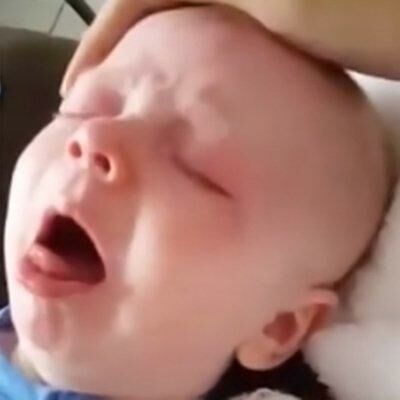 One mom is making quite the convincing case for vaccinations, sharing a video of 4-month-old Austin suffering from a bout of Pertussis, aka  whooping cough.

In Rebecca Harreman’s video, her teary, red-faced son is badly coughing and wheezing, and has been for more than a month. But, as she explains in the video, this is a good day.

“This is a GOOD coughing fit in a 4 month old with Pertussis, or Whooping Cough, 23 days after his cough started — which is when it’s supposed to be getting past the bad stage,” she writes. “It lasts for up to 100 days, but a simple cold I passed onto him that I caught from being with him in hospital is making him relapse again.”

She explains that previously, the length and severity of his coughing fits were causing him to turn blue. But thanks to his age, size and the fact that he’s had his first vaccination, Austin is fighting a good fight.

“I don’t care that vaccinations have side effects, because every person in this world reacts differently to all types of food, products and medicines,” Harreman writes. “I could not care less, even if it is ever proven one day that they don’t work. You know why? Because at least at the end of the day I tried to do something to prevent this…because doing nothing goes against every cell in my body as a mother. Doing  nothing is just wrong.”

“For those of you sitting on the fence on whether to vaccinate yourself and your kids or not…maybe this video will convince you,” she says. “This is getting worse because people are not vaccinating!”

She has a point. It only takes one unvaccinated person to spread a highly-contagious virus. Based on standard vaccine schedules, baby gets his first DTaP vaccine — which combats Pertussis along with Diphtheria and Tetanus Toxoids — at 2 months old. And the fact that this baby was already vaccinated may have prevented his symptoms from being even worse.

“Vaccines are good for public health and the prevention of spreading viruses, but on an individual level, they’re good for preventing more serious complications from illnesses,” pediatrician Cheryl Wu, M.D, based in New York City, tells The Bump.

If you’re still wary of vaccinations, consider talking to your pediatrician about a modified immunization schedule. We’ll say it again: All babies need to be vaccinated.

As for Austin? He’s currently back in the hospital. Updates on his status may be unlikely; Harreman appreciates the support, but announced she’ll be making her Facebook profile private.