Banned Baby Names: How to Keep Yours From Landing on The List 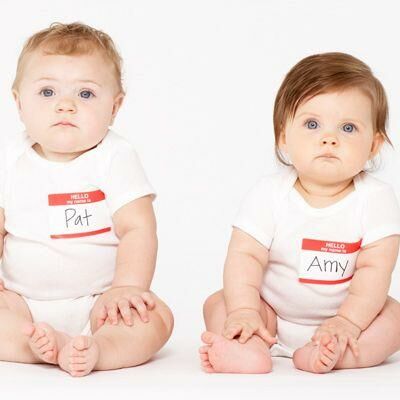 Over the weekend on Weekend Today , The Bump took to the TV screen to bring some of the latest (and most salacious!) baby naming news to households around the country. Whether you’re trying to think of a unique moniker for your bundle (check out our color-inspired list!) or curious to see what your baby’s name means, you won’t believe that in some countries of the world certain names are banned.

But first, let’s talk about our favorite names of the moment — the unconventional monikers that keep popping up all over. Since parents don’t want to pick a name for their babe that everyone else is choosing, they’re trying to come up with more unique, special names that make their children stand out. Wondering who takes the cake when it comes to original names? Celebrities! That’s right, names like Blue Ivy (Beyonce and Jay-Z’s adorable baby girl), Zuma Nesta Rock (Gwen Stefani’s youngest son), Honor and Haven (Jessica Alba’s daughters), Tennessee (Reese Witherspoon’s son), Olive (Drew Barrymore’s baby girl), Brooklyn, Cruz and Romeo (Victoria and David Beckham’s boys names) and Maxwell Drew (Jessica Simpson’s little girl) have definitely raised the bar on how out-of-the-box naming can be.

The trick to picking a name that’s different from all the rest is thinking long-term. Sure, Junior might be adorable for when baby is just that — a baby — but it might not look so hot on a resume. Think about it like this: a name isn’t just for the moment: it’s forever. We especially love Harper Renn (Tiffani Thiessen’s daughter’s name) and Jackson Riley, Jim Carey’s son’s name).

But now let’s talk about the banned names. Yeah, banned. As in, no, you can never use 'em, not even for a second.

Most countries that do ban names rarely give a specific reason as to why — it’s usually because they’re too confusing, too gender-netural, or too threatening to the child or to the culture. Countries like Sweden keep control over names by making all names subject to a naming law. (Names like Lego and Google are okay, but Superman, Metallica and Elvis are banned by Swedes!)

Just last year, New Zealand made headlines by banning the name Lucifer after receiving three individual requests from parents. And that’s not the only name the Kiwi’s have dropped. Over the past two years they’ve rejected 102 names including: Messiah, 4Real, Yeah Detroit, Kennan Got Lucy, Sex Fruit, 69, Baron, Bishop, Duke, Judge, Justice, King and Knight. In Japan, parents were banned from using the name Akuma, which literally means Devil.

While we’re not really sure why you’d pick ‘Yeah Detroit’ as your child’s name, we suggest picking a name that flows together when you say it out loud. ‘Yeah Detroit James’ doesn’t really do it for us.

How did you pick your child’s name?