Because We Thought You’d Want a Dose Of Cuteness 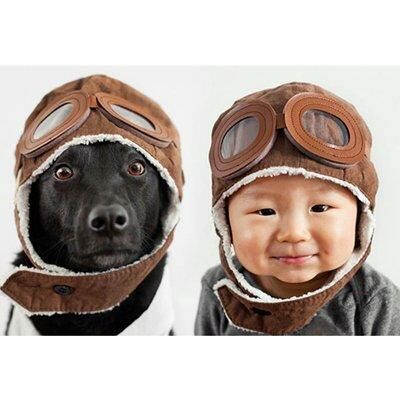 It’s common knowledge that dogs and babies are the two cutest things to photograph (according to me, at least) — but when you take a picture of a pup and a baby in matching outfits , that’s when the awwwws start pouring out uncontrollably. Meet 7-year-old rescue dog Zoey and her 10-month-old best friend Jasper , who pose together in matching outfits and stylin’ headwear courtesy of Jasper’s awesome mama, Grace Chon.

Grace, an LA-based commercial photographer, has a Tumblr fittingly called “Zoey and Jasper” and told The Huffington Post how she got the idea for her too-cute-for-words pics.

“I’ve always dressed up my dogs in silly costumes, so naturally when I had a baby I started collecting some hats for photos,” Grace says. “One day I put one on Zoey and I had the epiphany that baby hats look ridiculously adorable on dogs too! My sister had the brilliant idea of sitting them side by side in a photo. The response was immediate and I just kept going with it… I’m so glad I’ve found a fun activity that involves both of them!”

Here are more sweet snaps of Zoey and Jasper:

Have you taken any cute photos of your baby and pets together?