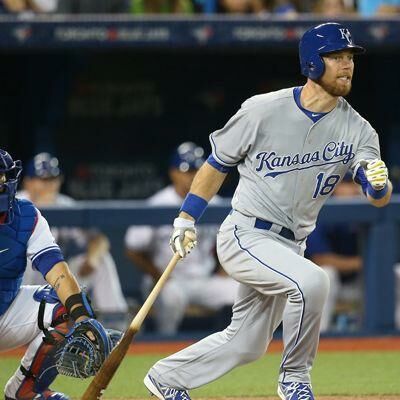 Two games into the World Series, the Kansas City Royals are two games ahead of the New York Mets. The stakes are high. A title’s on the line. But will one player bow out, stepping up to the plate as a new dad?

Midseason addition Ben Zobrist, whose postseason batting average of .347 shines above the gold standard of .300, is expecting his third child any day now. His wife, singer Julianna Zobrist, is due in a few weeks, after the scheduled date of Game 7 (Nov 4). But, as we know, due dates are just guesstimates.

But the Zobrists are playing it cool. Julianna just sang the national anthem at Game 1 of the American League Division Series against the Houston Astros. She and Ben are already parents to 6-year-old Zion and 4-year-old Kruse. And she’s pretty sure she can handle the birth of baby no. 3 on her own.

All she’s asking for if he misses the delivery? A home run.

“If she has the baby, then there’s nothing I can do,” Ben said before Wednesday’s game when asked about a plan if he’s on the road or in the middle of a game when Julianna goes into labor. “Obviously if it’s a family matter and it’s an emergency and there’s something that I need to be there for, I’ll be there. But barring that, if I’m gone, she just said, ‘You better hit a home run if I have the baby without you.’”

It’s a very different story from that of his Mets opponent and National League Championship Series MVP  Daniel Murphy, who missed the first two games of the 2014 season for the birth of his son, Noah.

Granted, early games don’t quite carry the same weight as the World Series. And what’s best for every family is different. Ben said he and Julianna know their arrangement works for them.

“I can only focus on one thing at a time anyway, she knows that. I’m one track-minded,” he said. “So it works pretty well, I think, knowing that she can handle herself. And she’s a strong woman, so she’s already kind of let me know that if we’re in the middle of a game, she’s probably not going to tell me anything that’s going on. And that’s fine, because I trust her and I trust the people that are around her, our family members that are with her and stuff right now.”

Still, some are skeptical.

Time will tell what happens. But a home run seems like a pretty good push present to us.