The military’s been making strides in maternity leave. And now dads could see those perks too.
ByAnisa Arsenault
Associate Editor
PublishedMar 2016 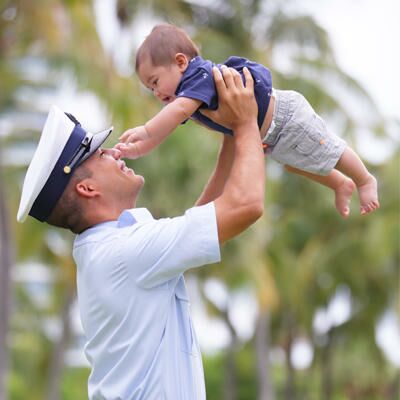 Military moms and dads are one step closer to getting paid parental leave. This year, Defense Secretary Ash Carter unveiled all sorts of family-friendly plans, including longer paid leave for birth moms, dads and adoptive parents. But he needed Congress’s stamp of approval to make it official. Thanks to Representative Tammy Duckworth–who is an Iraq War veteran herself, a concrete bill has been introduced, with some positive tweaks included.

Like Carter’s proposed plan, the bill calls for all women in the military to receive 12 weeks of paid maternity leave. This new policy doubles the amount of paid leave previously granted to women in the Army and Air Force. Unfortunately, it scales back the leave policy in place for the Navy and Marines, cutting back their 18 weeks paid leave to 12 weeks.

But the bill builds upon Carter’s suggested plan for military dads and adoptive parents, extending the 12 weeks of paid leave to them as well. Carter’s plan only allotted for two weeks of paternity leave, compared to the standing policy of 10 days.

“I applaud Defense Secretary Ash Carter’s recognition that a modern military demands a modern benefits package to continue recruiting and retaining the world’s finest troops, and I look forward to working with my colleagues in Congress to help our Armed Forces better compete for talent,” Duckworth said in a statement. “I hope Congress will step up and pass my Military Parental Leave Modernization Act to secure the rights and protections that all new parents, both in and out of uniform, deserve—doing so will only make our military stronger and more competitive.”

This bill only addresses the issue of parental leave in the military. The details of Carter’s other suggested perk, a pilot program to pay for troops to have their sperm and eggs preserved, are still being outlined by the Defense Department.