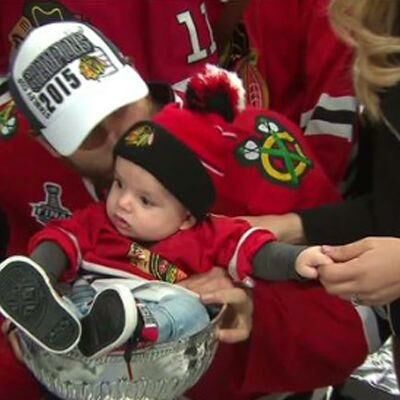 For the Chicago Blackhawks, the Stanley Cup is a symbol of last night’s victory over the Tampa Bay Lightning. But for 2-week-old Jaxson James, its just another place to sleep.

Does the fact that he attended a major league championship at just two weeks old — wearing noise-cancelling headphones and all — make Jaxson a bigger fan than Mike Fisher and Carrie Underwood’s hockey baby?

It’s up for debate. Either way, Jaxson wasn’t the only baby to get in on the Stanley Cup cradle action. Andrew Desjardins’s son Ames also got cozy in the Cup.

Future MVPs? They have our vote.