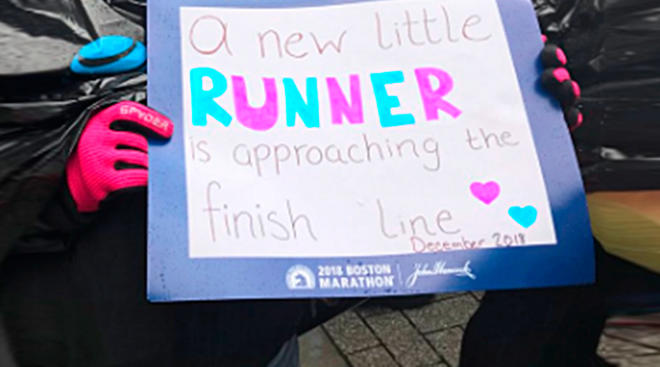 A poncho-clad Cassi De La Torre waited for her husband in the freezing rain at the finish line of Monday’s Boston Marathon. Like many spectators, she was holding a sign. But hers didn’t offer encouraging remarks or congratulations to runners. Nope; hers was a pregnancy announcement, designed to let Xavier De La Torre know his third baby was on the way.

The problem? Xavier didn’t make it to the finish line. Poor weather conditions forced him to drop out at mile 15, where staff at a medical tent helped get his shaking and shivering under control.

When Cassi’s runner tracking app told her Xavier had stopped running, she started to panic, concerned something was seriously wrong.

“He ended up calling me and telling me he got super cold at mile 15,” Cassi tells Boston.com. “By the time he called me, of course I’m still freaking out, and I completely forgot to tell him I was pregnant.”

She was able to break the news when they connected at the Family Meeting Area, located past the finish line.

“Of course, he was still in shock from the cold and stuff so he didn’t have such a big reaction at first,” Cassi says.

When it did sink in, Xavier wasn’t surprised at all.

“I’ve been telling her she was [pregnant]!” he says, indicating she’s been tired and sick lately.

Cassi has spent nearly a month telling Xavier he was wrong, making it a point to save the announcement for Boston. The marathon was extremely special to the couple, who met while running track in high school, and coach cross country together at their alma mater in in Bayard, New Mexico. This is the first time Xavier qualified for the Boston Marathon, and they fundraised $4,000 to cover the cost of the trip.

Xavier says he’ll be back to finish the marathon in the future. And maybe the couple’s new little runner will come along for the trip.