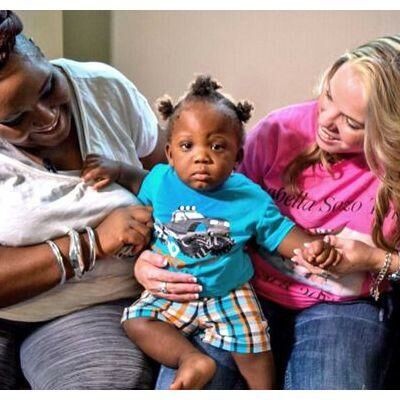 When Detra Chappell gave birth to her son 12 weeks early, her nurses said breast milk would be key to helping him survive. The problem? Chappell wasn’t able to produce enough supply to keep up Dekevyon’s demand.

“They stressed that to the fullest,” Chappell tells WFAA of Dallas-Fort Worth. “Like, whatever [breast milk] you can get, put it in the little bottle and bring it.”

She turned to the Mothers’ Milk Bank of North Texas and an anonymous donor through Methodist Richardson Medical Center, where she gave birth, to feed 2-pound preemie Dekevyon the recommended 5.5 ounces of milk per day.

Eventually she was introduced to the donor, Jennifer Tiner, who generously supplied Chappell with about 33 gallons of breast milk.

Tiner’s donation, which she calls ‘liquid gold,’ came at a price money couldn’t buy: the memory of her daughter Isabella, who passed away at 13 months old after complications from seizures, sometimes dozens per day. Soon after Isabella’s death, Tiner learned that her milk supply could help save the life of another child.

“She lives on; she’s not forgotten,” Tiner says of her daughter. “She saved [Dekevyon] through her milk.”

Upon meeting Tiner, Chappell was still awestruck at this stranger’s generosity. “It’s amazing. I’m at a loss for words,” Chappell said when she met Tiner. “I’m glad I finally got to meet you, because I was always wondering, ‘Now, who is it coming from?’”

Since that initial meeting, where Chappell asked Tiner to be Dekevyon’s godmother, the two mothers have celebrated Isabella’s memory alongside joyous celebrations like Dekevyon’s christening and birthday.