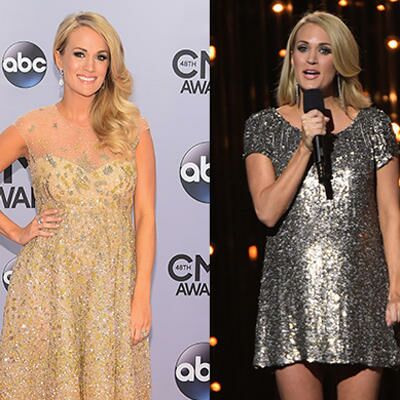 It looks like Brad Paisley can’t keep a secret.

“Hey, we could name  him Garth!” he told Underwood after talking about Garth Brooks’s comeback.

“What are you doing? What is wrong with you?” said a seemingly annoyed Underwood, who had just whispered the gender to Paisley. “Well, you kept that a secret for a whole two minutes.”

While we’re pretty sure the skit was planned, we’re still pretty thrilled to know we can expect a boy in early spring. Even though a girl would totally benefit from mom’s sense of style: Underwood pulled off 11 (!) different bump-flattering outfits Wednesday night. We were blown away  by her first outfit, a neutral Lorena Sarbu dress, complete with elaborate beadwork and an asymmetrical hem, worn on the Nashville red carpet.

Admittedly, we are a little concerned with Paisley’s name suggestion. Garth? Here are a few other country music-inspired boy names for Underwood and husband Mike Fisher.

Whatever Underwood chooses, we’re sure it won’t be somethin’ bad.