Choosing a Pregnancy Test — a Guide For Men 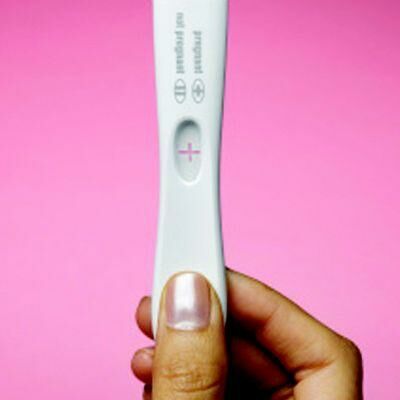 If a woman becomes pregnant, in most cases she knows something is up early-on. She feels different.  She suspects. And when she asks you to pick up a pregnancy test from the store on your way home from work, this is where the fun really begins for the expecting dad — be prepared!

It sounds like a simple request: drive to the store, pick up the stick, drive home and let your wife pee on it. But in reality it can be both difficult and overwhelming. Once you get to the store — look out — there are over 10-15 different brands each with their own fun way of telling you, “yes” you are pregnant. So which one do you buy? (And by the way they are very expensive, around $20 a box, so the decision-making process gets hampered a bit by this fact.) There is the blue line, the red line, the yes/no — one actually has the word “pregnant” on it — the three-line test, and so on and so forth. The first time I went down to the store, I came home with over $100 dollars worth of tests because I was so overwhelmed and I didn’t know which one to buy – and I’m a pharmacist; I should know better.

In my case, I purchased the pregnancy tests out of excitement before my wife even asked me to. I brought them all home and left them on the bathroom counter. When my wife came home and saw the tests in the bathroom she immediately wanted to know why I had purchased the tests (in other words: do I think she looks fat?). Of course that wasn’t the case, in fact I had purchased the tests because I was so excited. I just reminded her that we have been trying, and I thought she might want to read about the different tests, or maybe even try one out!

Well the tests I brought home sat on the bathroom counter — exactly where I put them — for two days. Then one night she told me she’s not pregnant. She said she tried two different sticks and they both said not pregnant. I reminded her that the test works the best in the morning with the first pee, and encouraged her to try again; a hormone known as “human chorionic gonadotropin or HCG” has its highest concentration in the morning.

Most of the tests come with two sticks per box anyways, so that you can test twice, because no one believes the first test, for some reason or other. The next day, we opened all of the boxes and tried one from each box. Sometimes the results can seem unclear, so, as the soon-to-be expectant daddy, I suggest helping by reading through the directions thoroughly and helping to decipher the results. In our case, the results were inconclusive and uncertain, so, again we decided we would try again the following morning with another first pee.

After our “practice day” the morning prior, we had perfected a system. When the morning came, we were both prepared and ready; she went in the bathroom, and I stood outside with the box. She said, “stick,” I handed it to her, she peed, then handed it out, and asked for the second one; I was ready. We had two sticks with the first pee of the morning, and were thrilled to find out the results were overwhelmingly positive!

The very next day, she called the doctor and said she thinks she may be pregnant; they sadly said, it is too soon, and that she needed to call back in two weeks.

Have you ever wondered when you would experience the “longest two weeks” of your life? These were definitely mine!

How did you choose a pregnancy test?

Happy National Family Week: Are You Ready to Expand Your Family?

Choosing a Pregnancy Test — a Guide For Men