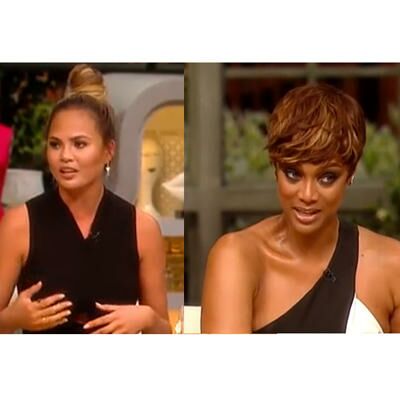 It’s nobody’s business when celebrities are going to have kids, okay?

That’s the message from a recent  FABlife segment with Tyra Banks and Chrissy Teigen.

And it’s not that they don’t want kids. Quite the opposite, actually. Back in April, 29-year-old Teigen told  DuJour all about the parenting goals she shares with husband John Legend. “We want a lot of kids,” she said. “I would love to have three or four of my own, and then adopt a few. So basically I’ll be pregnant the rest of my life.”

But on her new daytime show, she offered more insight on the sensitive subject.

“John and I were having trouble,” she said. “We would have had kids five, six years ago if it had happened. But my gosh, it’s been a process.”

She indicated she’s been inundated with questions about her family plans.

“Just being two years into being married, the questions just come from all over. It’s kind of crazy because I can’t imagine being that nosy to be like, ‘So, when are the kids coming?’ because who knows what somebody’s going through.”

So now, Teigen is offering her response.

“Anytime somebody asks me if I’m gonna have kids, I’m like, ‘One day you’re gonna ask that to the wrong girl who is really struggling and it’s going to be really hurtful to them.’ And I hate that. I hate it. Stop asking me!”

Cheers and applause prompted Tyra Banks to weigh in on her experiences with those personal questions. While she didn’t plan on opening up about infertility or motherhood, her emotional response makes it clear those topics hit close to home.

She’s right; it’s not so easy. A woman’s fertility starts to decline around age 27 and dramatically drops off after 35. While women in their twenties have about a 20 to 25 percent chance of getting pregnant any given month, a 35-year-old woman sees odds of about 10 percent. After 40, it’s even tougher, but plenty of fertility treatment options are available.

Banks’s experience of focusing on career over kids resurfaces the question we ask again and again: Can women have it all? We’d still like to think so. Watch the full segment below, and let us know your experience.