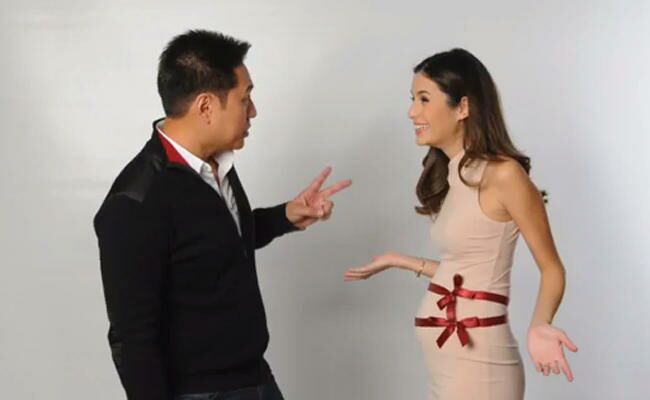 It’s hard to find the perfect gift for your significant other. But Sonya Davison Sanchez found two.

In a homemade stop-action video festively set to “Jingle Bell Rock,” Sonya gifts husband Judd with a baby bump. But before he can fully celebrate, she ties a second ribbon around her belly; twins are on the way!

Of course, the dad-to-be knew about the news before the creation of this video, which was intended for family and friends. But Sonya tells The Bump the way she actually told him she was pregnant wasn’t so different from the video.

“I gave him a gift box with a bow that had the pregnancy test stick inside for the actual reveal,” Sonya says. “That’s how I had the idea to do a gift box hiding my tummy in the announcement video.”

Still, twins were a shock to both of the Singapore-based parents-to-be. “We found out about the twins at the same time at the doctor’s. My husband was so excited and happy about twins—like he just scored a touchdown, inspiring his signature pose in the announcement video,” she says. “I was more in shock, mostly because of the unknown, but of course once the shock subsided and the doctor explained the risks are lower with fraternal twins (for example, fraternal twins can’t experience twin-to-twin transfusion syndrome), I was so happy. I wouldn’t want it any other way now.”

Sonya, a television host, says the video was a fun creative side project.

“It was my idea to make the video; I basically forced my husband to participate,” she says. “He doesn’t really like being on camera, but in the end we had so much fun making it and he loved the final outcome.”

After doing a sort of dress rehearsal the night before, the couple rented a studio and enlisted the help of a photographer to take photos based off of a storyline they developed. But the editing was all on Sonya.

“The photographer gave me the raw files and I pieced together the whole clip on iMovie at home. It took about five hours total,” she says.

The couple will be moving stateside in February, seven months into her pregnancy, since Judd’s job is taking him to San Francisco. Look out for a birth announcement video this spring: baby Sanchez is due on May 31.