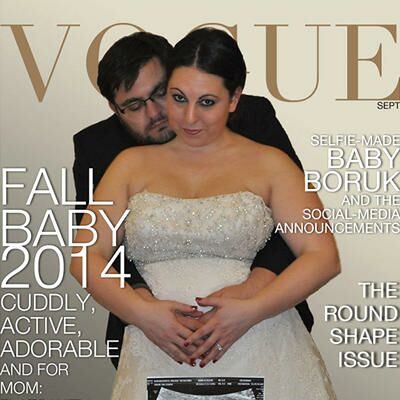 It was only a matter of time before people other than James Franco and Seth Rogen parodied Kim Kardashian and Kanye West’s Vogue cover — but who would have thought it would have been the perfect basis for a pregnancy announcement? NYC couple Maggie and Gennady Borukhovich, an administrative professional and the co-founder of FarFaria, respectfully, put Kanye’s arms around Kim’s stomach to good use.

They Photoshopped their own version of the magazine cover to announce their baby news in a new and hilarious way using a picture from their 2011 nuptials. With Maggie in her wedding dress, Gennady is holding her from behind with his hands on her stomach with a photo of their sonogram below them.

Their cover lines range from the funny to the true, like, “Fall Baby 2014: Cuddly, Active, Adorable” and “And For Mom: Flats With Everything.” They also added the hashtag “#WorldsMostHashtaggedBaby.” Looks like North West has some serious competition!

Do you love this pregnancy announcement?

Most Hilarious Pregnancy Tweets, Status Updates and Posts Ever

Worst Movies to Watch While Pregnant

You Asked a Pregnant Woman What?!

'Pregnant Barbie' Is a Terrifying Introduction to C-Sections

How Women Really Feel About Giving Birth on Friday the 13th

Hilarious Hip-Hop Baby Announcement Will Make You Laugh (and Cry!) in Delight (WATCH!)

Been There: Big Brother Reacts to Baby Kicks for the First Time (WATCH)

Hilarious ‘Men in Labor’ Video Is a Must-See (WATCH!)