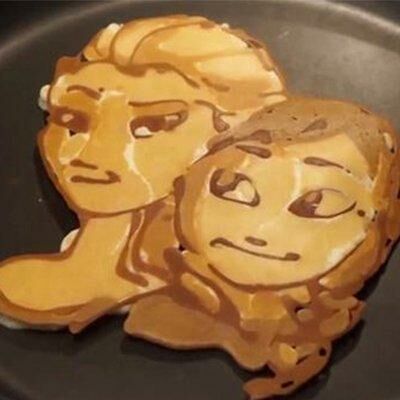 Nathan Shields kicked off the week with some Disney Princess magic. And we’re willing to bet he didn’t even know Thursday was National Tell a Fairy Tale Day.

Pancake works of art have become a Sunday ritual in his family’s Port Angeles, Washington home. In September, his pancake portraits of the Beatles went viral, and since then, the bar has been set pretty high. But this tradition, chronicled on his blog,  Saipancakes, is nearly three years in the making. And last weekend, his batter creation was tailored squarely at his daughter, Alice.

Alice’s reaction is priceless as she sees the likes of Elsa, Anna, Cinderella and Jasmine served on her plate.

The dad-of-two is a math teacher and professional illustrator, so he has a leg up on most parents in the creative department. But with a squeeze bottle and a lot of practice, you, too can become a breakfast artist.

“It started out as a way to entertain my kids, which it still is, but now it’s a fun artistic challenge as well,” Shields tells  TODAY. “I’m still learning through trial and error — which are still delicious.”

His kids have even begun to dabble in their own pancake art. But his wife, Cheri? No way. “I’ve never liked pancakes… I’d prefer an egg in the morning,” she says. “Also, it’s nice to sleep in on mornings when he’s entertaining the kids with his pancakes.”