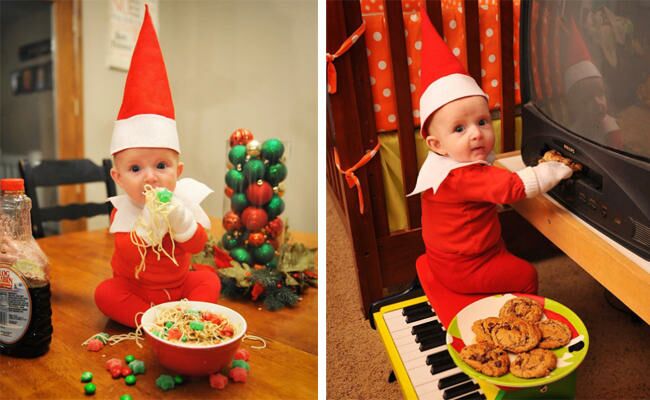 While Elf On The Shelf is designed to keep kids on their toes, we’re finding the same old photos of hiding spots are getting kind of stale. But Utah dad Alan Lawrence came up with an out-of-the-box photo opportunity: He turned his 4-month-old son into his own real life Elf On The Shelf.

Inspiration for this latest fatherly stroke of brilliance came from hearing friends and families talk about their own Elf On The Shelf strategies. Lawrence wanted in on the fun, wanted to make it his own.

“All of our friends do the Elf On The Shelf and I’ve always thought it was sort of creepy, but sort of fun — this idea of an elf coming to live in your home and moving around to different places,” Lawrence told TODAY Parents. “And I’m like, what if it was a real elf? And of course, being parents, we already have the cutest little 4-month-old. So we decided to make a fun series.”

And that’s how  Rockwell the Elf came to life.

Lawrence credits Rockwell’s precious and extremely realistic Elf costume to his wife. “She went to the fabric store, and when she was done, I was like, ‘Are you kidding me?! This is better than I thought!’” he explained.

Since then, Lawrence has been spreading the Christmas cheer by coming up with clever and playful scenarios for his little elf to take part in. He poses with his son in the photos and then edits himself out to craft his lifelike adventures. And as for baby Rockwell, he has no problem mimicking his pal Buddy The Elf.

“He’s just a good-natured kid,” Lawrence said. “He’ll be laughing and looking up at me, exactly what we need for the shot. It’s almost like he knows what we’re trying to accomplish.”

Check out a few of our favorite adventures below:

The family plans to post new pictures up until Christmas Day. Keep up with the exciting life of Rockwell the Elf on Lawrence’s website, That Dad Blog.